SWEPCO’s wind project announced Wednesday is the latest in a spate of power projects that will add more renewable options to Arkansas’ energy mix.

Plains and Eastern Clean Line is already working on a multibillion dollar wind powered, high wire energy project that will deliver 4,000 megawatts of low-cost electricity from Oklahoma’s wind-swept panhandle to utilities and customers in Arkansas, Tennessee and other markets in the Mid-South and Southeast.

But the Plains and Eastern transmission project is tied up in federal court after two landowner groups filed a lawsuit last year to protect property rights and interests of member landowners along the entire route of the proposed 720-mile project across the heart of Arkansas.

On Jan. 10, federal court filings show the U.S. District Court for the Eastern District of Arkansas in Jonesboro issued an order setting hearings for Nov. 14, 2017, on motions for summary judgment in a case brought in August by Golden Bridge LLC and Downwind LLC, represented by Little Rock attorney Jordan Wimpy of Gill Ragon Owen.

Original plans for that three-state project calls for the power lines route to enter Arkansas in Crawford County north of Van Buren and exit the state through Mississippi County north of Memphis. When completed, it is expected to deliver wind-powered electricity to 160,000 Arkansas homes annually, company officials said.

Clean Line officials have told Talk Business & Politics they still expect to begin construction on the project in the second half of 2017. Court filings show that Houston-based Clean Line hopes to complete the multi-state project by 2020. 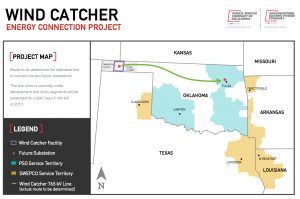 “We are pleased to see the case moving along. We are confident in the rigorous, nearly six-year process the Department of Energy undertook to approve of the Plains & Eastern project,” Clean Line officials said in a recent statement. “We have spent the last several years building relationships with landowners and acquiring easements across Arkansas. We look forward to breaking ground on the project as soon as possible.”

POSSIBLE MANUFACTURING BOOST FOR ARKANSAS
The possibility of two multibillion dollar wind energy projects bring power to Arkansas also has the potential to boost the state’s manufacturing and construction sectors, bringing hundreds of direct and indirect jobs to Arkansas. Like the Clean Line project, AEP – the parent company of SWEPCO – plans to hire hundreds of construction workers to help build the high-voltage transmission lines to deliver power to four states.

John Bethel, executive director of the Arkansas Public Service Commission, said SWEPCO officials had advised state regulators of their plans file to file an application for the approval of the wind-power project.

“It is my understanding that SWEPCO plans to file an application in the near future,” Bethel said.

The project is subject to regulatory approvals in Louisiana, Oklahoma and Texas as well as the Federal Energy Regulatory Commission.

Arkansas could also benefit from industrial giant General Electric’s near global dominance of the wind parts and manufacturing industry. In building the wind farm facility, GE Renewable Energy and Invenergy, North America’s largest independent, privately-held renewable energy company, are building the 2,000-megawatt wind farm that will be the largest in the U.S. and second-largest in the world, once operational.

The Wind Catcher facility is under construction in the Oklahoma panhandle and will generate wind electricity from 800 GE 2.5 megawatt turbines. And since GE is involved, it is likely wind blades for the project could be built at LM Wind Power plant at the Little Rock river port, which makes the world’s largest wind turbines. LM Wind Power operates a scaled-down manufacturing facility at the Little Rock Port Authority where the company’s payroll has ranged from 100 workers to more than 500. The company had to repay the state of Arkansas $3.4 million for not meeting the terms of the incentive package it received in 2007, when it announced plans to hire on 1,100 employees.

In April, GE Renewable Energy, the same company that is building the Oklahoma wind farm, closed on a blockbuster deal to purchase Danish wind turbine maker LM Wind Power for $1.65 billion, allowing the U.S. industrial giant to continue expanding its renewable energy reach across the globe.

GE, which is being investigated by the European Commission for over competitive concerns, also has a partnership with Clean Line to build high-voltage transformers for its controversial project. Paris-based Sediver also opened a $15 million, 75-worker plant in West Memphis that will produce toughened glass insulation for high voltage electrical transmission lines across North America, including the Clean Line project.