Construction and major renovations to properties in downtown Springdale could soon be held to new design standards, if the City Council votes to adopt a proposed form-based code approved unanimously by the Planning Commission in its regular monthly meeting Tuesday (March 7) at City Hall.

The code aims to give a consistent look to the downtown area and is a major step in the implementation of Springdale’s downtown Master Plan, approved by City Council in December 2015, said Patsy Christie, director of planning and community development for the city.

“This gives us an opportunity to make an impact in a small area” and shape how the downtown district will look, Christie said. (Link here for the 100-page proposed code.)

Standards for commercial, residential, civic and industrial properties are laid out in the plan and different rules apply based on the neighborhood type. For instance, the code would require new buildings on Emma Avenue to be at least two stories tall, in order to maximize space downtown, said Misty Murphy, executive director of the nonprofit Downtown Springdale Alliance. First-floor residences would not be allowed on certain portions of Emma Avenue, as the code requires the ground floor to be used for commercial space.

Murphy said the code will help ensure that future designs “fit the character” of downtown Springdale and where the residents and businesses want to see that going. If the city wants downtown to thrive and grow, “We have to change the way we develop in the future,” she said.

Murphy stressed the need to plan for the future in order to ensure the city is building an “economically diverse and healthy community” downtown. She said existing property owners do not need to alter their structures to meet code. The new code would apply only to new construction or when property owners make significant add-ons. 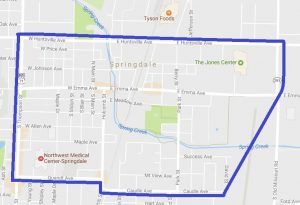 The code plan has “the softest trigger I’ve seen in these codes. We’re doing this with you in mind,” Murphy said, addressing residents and business owners in attendance for a public hearing on the code during the Planning Commission meeting. Christie said if standards are adopted, the city will form an adjustment board to review requests to deviate from the code. She also said the code is “not a perfect document,” that the city is still making changes and wants to be responsive to commercial needs.

“We want to bring change about downtown, but we want to do it in a way that is market-driven,” she said.

Planning Commission member Payton Parker said, “Our goal is to protect your investment. We don’t want to put an extra burden on you.”

He said Springdale was able to watch and learn as other nearby cities developed and implemented new downtown codes. Adoption of the codes could be the impetus for a few downtown property owners to announce their plans. A number of properties on Emma Avenue, including those owned by the Tyson and Walton families since 2014, lay vacant.

Some downtown developers having been “waiting to pull the trigger” until these standards were put into place, Parker said.

Planning Commission Chair Kevin Parsely said the ball is already rolling on changes to downtown, including the additions of stop signs on Emma Avenue, which he said creates a hub on the street and improves the safety of walking downtown.

“Emma Avenue was not designed as a cut-through,” Parsely said. The street is now set up to be more of a “destination,” with retail, restaurants and opportunities for a wide array of social gatherings.

H3 Studios, a St. Louis-based architecture and urban planning firm, developed the code, and a task force of downtown residents, business owners and property owners have been reviewing it “line by line” for “almost a year,” Murphy said. H3 also developed the city’s Master Plan.

The next Springdale City Council meeting is set for March 28 at City Hall.