EDITOR’S NOTE: The following story appeared in the Feb. 20 issue of the Northwest Arkansas Business Journal. “Then & Now” is a profile of a past member of the Business Journal’s  Forty Under 40 class.

Local mortgage executive Clay Conly grew up in the south Arkansas town of Gurdon, where his father worked for the same employer — International Paper Co. — for more than three decades.

“I always admired that,” Conly said.

Now well into his own professional career, Conly said he is starting to see the benefit of staying with the same company for a long period of time. Conly, 41, is president and CEO of First Western Mortgage (FWM), incorporated and expanded to Northwest Arkansas in 1991 as a wholly-owned subsidiary of Booneville-based lender First Western Bank. Conly was hired by the mortgage company in 1998, immediately after graduating from Ouachita Baptist University in Arkadelphia.

Nearly 20 years later, Conly said the thought of working anywhere else is unimaginable.

“When you have that tenure, I think people remember that and remember where you are, and that is helpful,” he explained. “Secondly, if you like who you work with, you really start to develop some relationships that you just don’t want to see go away. For me, it’s like working with friends, and it’s a cliché for sure. But it’s people you consider family.”

Conly was recognized as a member of the Northwest Arkansas Business Journal’s 2005 Forty Under 40 class. The mortgage business since then, he said, has changed immensely. Back then, it was much faster, more accessible and more profitable.

“Then we hit 2006 through 2010, and things changed a lot,” Conly said, a reference to the economic downturn. “Knowledge and experience became more important. But we’re really getting back to where we were in the glory days of 2003, 2004 and 2005. We’re starting to get to a point now where we’re looking at how we can grow our business again.”

FWM, which has 10 employees, did about $46 million in its secondary market loan portfolio last year. Conly said he wants to grow that number to $100 million in the next three years. FWM does business in two different regions — Northwest Arkansas (Benton and Washington counties) and Western Arkansas (Sebastian and Logan counties).

A return to Bentonville — a must, Conly said, for any lender that wants to be a player in Arkansas — should help First Western compete for added business in Benton County, considered one of the most competitive lending markets in the state. Construction of the bank’s new retail branch at 1108 S. Walton Blvd., approximately 5,000 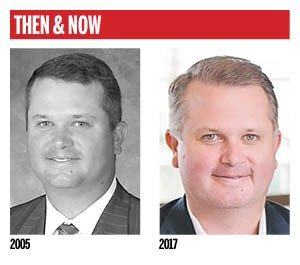 square feet, should be finished by the end of April.

First Western, which has three offices in Rogers and another in Bella Vista, previously had a branch in Bentonville, near the Walton Boulevard/Highway 102 intersection, but it was closed in the early 2000s.

“That was a bad decision, and we’ve always regretted it because about 40% of our loan business is in Bentonville,” Conly said. “We’re glad to be back. We feel like we need to be back and think it’s going to be a very profitable location for us.”

Conly acknowledges the competitive market in Benton County is a challenge. But, he said, the bank has built longstanding brand recognition to carve its niche in the region.

“We’re a small company, and we don’t spend a whole lot of money on marketing,” Conly explained. “But the people who know who First Western is know who I am. They know who [NWA Market President] Landon Taylor is, and they know who our people are. I think longevity and the relationships we have built with our tenured folks are what’s kept us going.”

The past 12 years have also brought growth to Conly’s family. He and his wife Cara are kept busy with a son who is 9 and a daughter who is 6.

“In 2005 on Saturdays I would get up and go to the golf course, and Cara would get up and do whatever she wanted to do. And then we’d meet up for dinner,” Conly recalled. “And we felt like we had a busy day. Our lives have changed way more for the better. I’m just a regular person, and I am so thankful for everything I have been given. I can’t complain about anything the Lord has done for me.”

Conly is a board member of Ouachita Baptist and the Sunshine School of Northwest Arkansas. He said his biggest professional ambition over the next decade is growing the bank.

“We’ve come through the tough times, and the last few years have been fun again,” he said. “We’ve started to see what kind of opportunities we might have.”