An unfortunate decision to take a semester off from Philander Smith College in Little Rock left Sherman E. Tate in the desolate hills on the Laotian border. It was 1967, and he had been drafted to serve in the Vietnam War. Without warning, a bullet whizzed in the air.

A platoon sergeant told him and the other new soldiers not to fret.

“Don’t worry about the bullets you hear. Those are the ones that miss you. The ones you don’t hear are the ones, you’ll take,” he said.

Tate survived his tour in Vietnam and will be inducted Friday (Feb. 10) into the Arkansas Business Hall of Fame created by the Sam M. Walton College of Business at the University of Arkansas. Tate, president of and CEO of Tate and Associates Management, will be joined by three others – Charles E. Scharlau, former president and CEO of Southwestern Energy Co., Thomas B. Schueck, Chairman of Lexicon Inc., and Gus M. Vratsinas, chairman of Bailey Construction and Consulting LLC.

“My wife (Marylene) and I are so humbled by this honor,” Tate told Talk Business & Politics. “I was most surprised. I knew I’d been nominated, but to be selected … I’m very pleased.”

After Tate returned from Vietnam he worked for the state as the first minority in the Bureau for Legislative Research, he said. Arkansas Louisiana Gas Co. (ARKLA) then CEO Sheffield Nelson talked Tate into joining his company. There were no minorities in management at that time, he said.

“That was a great job … it took courage for him to do that,” Tate said. 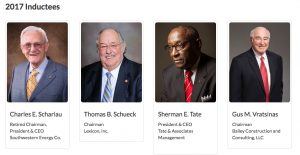 His path eventually led him Tate and Associates Management, a company that specializes in professional business development. The company helps businesses differentiate their products and services from others in those same industries. It also develops brand-building strategies and other services.

Tate is a former chairman of the Philander Smith College board of trustees and served as the chairman of the Greater Little Rock Chamber of Commerce. He credits his success in life to his mother, Annie’s insistence that he educate himself at an early age and the hard work instilled in him by his father, Rufus.

Vratsinas told Talk Business & Politics he was also surprised when he learned he’d been inducted. It’s hard to believe he will be in a hall that includes Sam Walton, William Dillard, Charles Murphy, and others, he said.

As a child, Vratsinas marveled at the way buildings and highways were built and how men and machines came together to construct these edifices, he said. After high school he spent a stint in the Army and was stationed in South Korea and eventually completed his engineering degree at the University of Arkansas before starting his career.

He spent many years in construction, and came to the realization the business side of the industry is just as important. He is the chairman of Bailey Construction, a Little Rock based company that specializes in retail, entertainment, and healthcare construction projects. The company has projects or is registered in more than 20 states across the country.

Vratsinas, 72, is married to Irene, and he offers young entrepreneurs and business people one simple piece of advice.

“Find an industry you like and get in on the ground floor. Work your fanny off,” he said. “Too many people these days jump from job to job.”

Charles Scharlau, 88, took a long path to become the chairman, president and CEO of Southwestern Energy Co. When he was in high school, Scharlau joined the Marines and fought in World War II. When he returned home he attended the University of Arkansas and once he completed his studies, he began work as an attorney with Arkansas Western Gas, the precursor to Southwestern Energy. He was appointed Southwestern Energy’s vice-president and a director in 1966, and then was promoted to president in 1972, a position he held until 1998. Scharlau remained a director with the company until May 21, 2013, according to Bloomberg.

Scharlau was also active with the University of Arkansas. He has served as a trustee at the university from 1997-2007, and served a term as its chairman. He is of Counsel at Conner & Winters LLP in Fayetteville, and he is a former chairman of the Arkansas Chamber of Commerce and the Fayetteville Chamber of Commerce. In 2015, he donated $5 million to his alma mater. His wife, Clydene, passed away in 2012.

Thomas Schueck is the chairman of Lexicon Inc., a holding company that specializes in steel mill construction, building golf courses, fabricating bridges, and other industrial construction projects. Schueck, 75, told Talk Business & Politics he decided to form his own company after he saw no opportunities to advance at the company he was working at more than 50 years ago.

“I just decided there was no future there … I liked to sell things and I knew I was good at it,” he said.

When he found out he had been selected, it was a surreal moment, he said. Schueck said the award is indicative of the hard work his employees have put into his business, and he is grateful for their service.

“It’s a great honor. It’s the highest honor in the state a business person can get,” he said.

He and his wife Marge didn’t have a lot of money when they started Lexicon. Marge spent many long nights as the fledgling company’s secretary, assistant, and in other roles. She worked even when she was pregnant.

“Could not have done it without her,” Schueck said.

As time passed his company grew and became more profitable. One of their specialties is steel mill construction, he said. During the last 30 years or so, Lexicon has been involved in the construction of almost every steel mill in the South, he said. Schueck oversees a family of companies including Schueck Steel. He serves on the Arkansas Highway Commission and is a former member of the Little Rock Airport Commission.

What would he tell someone who is ready to tackle the real world?

“Take whatever you’re good at and pursue it,” he said. “Pursue it with vigor and hard work. Find good people and build relationships. That’s the key to success.”