Wal-Mart Stores began handing out pink slips to as many as 1,000 workers in the human resources, information systems division, replenishment and financial services areas on Friday morning (Jan. 20). Most of the cuts were in Bentonville.

The Bentonville-based retailer confirmed the 1,000 jobs which a company executive said involves across the board cuts. Wal-Mart did not provide any other details about the restructuring efforts except to say those displaced will remain employed for 60 more days with full benefits and pay including their year-end bonus. If they have not found employment after 60 days they will be given severance packages relevant to the pay and position, the executive said.

“Wal-Mart is in a period of investment to better serve customers. To do that, we continue to find ways to operate more efficiently and effectively, true to our cost-conscious heritage. We’re getting great feedback from our customers about the changes underway and plan to be aggressive going forward to serve them even better,” the company said in an emailed statement to Talk Business & Politics.

‘LESS BUREAUCRACY’
Wal-Mart Stores CEO Doug McMillon noted recently in an email to employees that the retailer is changing to win.

“To deliver the changes we ultimately want customers to see on the outside, we have to change on the inside. We need more speed and less bureaucracy. We need lower costs,” McMillon noted.

He forecast then that the need for continued investment and capital discipline would ultimately mean the elimination of positions in some areas of the business. He said Wal-Mart aims to stay lean and nimble in order to change processes and become more digital.

“These are hard choices. We care about our friends and colleagues and will do our best to handle these transition smoothly and always with respect.” McMillon concluded. 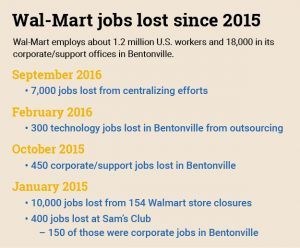 Talk Business & Politics was notified Friday morning of the layoffs from three people close to the situation. Sean Nicholas, a former Wal-Mart employee, knows people on the layoff list and made the following post on the Walmart Suppliers Facebook page around 10:30 Friday morning.

“Several talented individuals will be seeking new opportunities in the supply chain industry today … Walmart is making several cuts in its replenishment division.”

Cameron Smith, CEO of recruiting firm CSA Associates in Rogers, said his company began hearing from displaced Wal-Mart employees Friday morning and he said they will working closely with those laid off to find their next opportunity.

“When these things happen it’s like triage in our office, because we want to help as many as we can find new jobs,” Smith said.

This is the largest corporate layoff in Wal-Mart’s recent history, deeper than the around 800 who lost their jobs in February 2009. Wal-Mart cut 450 local jobs in October 2015 and another 300 in its ISD division in February 2016, and there has been corporate restructuring at Sam’s Club as well.

LAYOFF IMPACT
Wal-Mart is the largest employer in Northwest Arkansas and a layoff of around 1,000 workers is a shock for the local economy as many of the jobs are for high-paid professionals. Greg Hamilton, senior economist for the Economic Advancement at the University of Arkansas Little Rock, estimated that the loss of 1,000 corporate jobs in Northwest Arkansas could impact the region by almost $47 million a year and result in the loss of about 391 non-Walmart jobs.

While these jobs are being lost, Kathy Deck, director the Center of Business & Economic Research at the University of Arkansas, told Talk Business & Politics the region is strong enough to weather the shock. She said that is no consolation for those who are impacted personally.

“As a region we should hope that Wal-Mart remains a strong and competitive company in a rapidly changing world. That’s the only way it can remain a stalwart of support for this region,” Deck said.

Michael Harvey, interim CEO of the Northwest Arkansas Council, said large corporate layoffs in any region are tough, but he said the local economy is growing jobs in healthcare and logistics, and perhaps some of those impacted by the Wal-Mart downsizing can find employment in those sectors.

“We hope that skills line up for a lot of those impacted so that as many as possible can remain in the Northwest Arkansas, but we know it’s unlikely they all will,” Harvey said.

Harvey said another challenge with those whose skills are transferable is that the available jobs in the region will likely pay less than Wal-Mart and those with longtime seniority often have to start over with a lower pay scale.

Harvey said if the region is going have international companies it has to be able to weather restructuring because it’s part of the business evolution process. Deck agreed, saying some perhaps will find opportunities as entrepreneurs. She said larger the number the more impact there will be on ancillary sectors such as real estate and service companies like restaurants.

Peggy Knight, a former Wal-Mart and Sam’s Club executive, said she too began hearing from displaced workers Friday. Knight, who is a retail/supplier consultant, said her heart breaks for those who spent two and three decades with the retailer. Knight said she heard from hourly and salary positioned personnel leading her to believe the cuts were broad.

“I know Wal-Mart management thinks they have to become more like Amazon. Back in my day it was Target. Sam always valued his people and never tried to be another retailer. He stole shamelessly from his competition and always worked to be better, not the same,” Knight said. “I know retail is changing, that has always been the case but at its core it’s Wal-Mart people who make the difference. Sam knew that and I hope that isn’t lost in the shuffle.”