Economic conditions in four Arkansas metro areas remained solid in the third quarter of 2016, with the only negative being slower rates of growth in central and Northwest Arkansas.

Compared to the third quarter of 2015, the pace of economic growth was down slightly in Central Arkansas and in Northwest Arkansas, up in the Fort Smith metro, and up in the Jonesboro metro.

“The unemployment rate in Northwest Arkansas was the lowest in the state amongst all MSAs in September (2.9%). It was 0.7% lower than that for the Little Rock/North Little Rock/Conway MSA (3.6%),” Collins noted. “To add perspective, of the 387 MSAs in the country, only 3 posted rates above 10% while 26 had rates below 3%.”

Nationally, Collins said the consumer is beginning to show real signs of spending more and having more to spend.

“Consumer demand continues to expand. Real personal consumption expenditures grew by 2.8% in the third quarter compared to an increase of 4.3% in the second quarter,” according to Collins. “The consumer continues to drive growth. Consumer confidence has reached a nine year high.”

Helping to drive the slightly better gain was an improvement in the regional jobless rate, gains in regional sales tax revenue and a surprising gain in the number of manufacturing jobs. 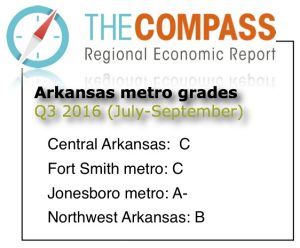 “Data for the Fort Smith regional economy is mixed. On the one-hand, the declining unemployment rate and stabilized manufacturing sector bode well for future performance,” Collins wrote. “On the other hand, a reliance on growth in the government sector to lead employment growth is not sustainable. Given strong growth in other major metros in the state, the results were disappointing.”

“Of all the economic indicators, unemployment rates at or near the full employment rate of 4.0 percent stand out. Growth has been solid in the state’s largest metro,” Collins said.

JONESBORO METRO
The region posted a third quarter grade of A-, unchanged compared to the second quarter. The Jonesboro metro began its first quarter in The Compass Report with a B+ in the first quarter of 2016.

Nonfarm employment continued to expand in the third quarter. Non-farm jobs totaled 56,800 in September, up from 55,100 in September 2015. The pace of growth moderated compared to the second quarter. 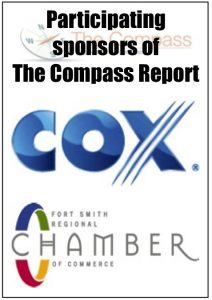 The region also posted a significant uptick in building activity, but Collins said the quarterly numbers are not likely part of a trend.

“The number of building permits in the third quarter for the Jonesboro metro were up approximately 96% while the valuation of permits was up roughly 48%. The massive increase was due to a large number of apartment units being reported as permitted for the quarter by the U.S. Census Bureau. This is obviously an anomaly and the large number of units should have a dampening effect on future multi-family construction,” Collins said.