Earnings beat estimates by 4 cents, according to a consensus of analysts surveyed. Excluding two one-time factors — a $15.2 million pre-tax, one-time benefit for the change in employee paid-time-off policy and a $5 million charitable donation — earnings were closely in line with estimates, said transportation analyst Brad Delco of Stephens Inc. Delco and Stephens offer investment banking services for J.B. Hunt and are paid for the work.

“Overall results were in line with our expectations,” said Delco, having projected earnings per share of 99 cents for the quarter.

SEGMENT FINANCIALS
Operating income for Integrated Capacity Solutions, or brokerage division, fell 52% to $6.074 million and missed Delco’s estimate by 2 cents. Profit margins “get squeezed a little bit” in the fourth quarter when the market starts to improve because of the holiday season, he said. 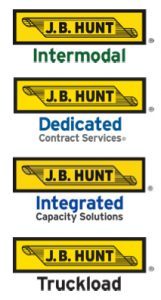 Brokerages such as J.B. Hunt’s offer a fixed rate to deliver freight, and 75% of the company’s rates are set by contract. And in the fourth quarter when spot pricing for truck drivers increased and capacity became tighter, profit margins are impacted. Segment revenue increased 22% to $231.594 million.

Operating income for intermodal, the carrier’s largest segment by revenue, fell 3% to $124.143 million. The number of loads rose 5% to 491,570 for the quarter, compared to 467,461 for the same period in 2015. Revenue per load fell 1% to $2,030, down from $2,069. Segment revenue rose 3% to $997.967 million for the quarter. Delco expects top-line growth as the industry is “set up to see growth.” When the truck capacity becomes tight, freight starts “spilling into intermodal.” Another tailwind to the segment is that diesel prices have risen 20% compared to the same time last year.

‘PROMISING SIGNS’
In December, freight shipments rose 3.5% from the same month in 2015, but expenditures fell 3%, according to the Cass Freight Index Report. The shipments index fell 0.5% in November, after marking its first increase in 20 months in October, when it was up 2.7%. The December increase “suggests that the October data was not a false positive but instead the beginning of a more positive trend.”

Broken down by transportation mode, truck tonnage has seen month-to-month improvement while rail has become “less bad,” the report shows. “Data is beginning to suggest that the consumer is finally starting to spend a little, and that with the recent surge in the price of crude, the industrial economy’s rate of deceleration has eased. If the winter of the overall freight recession we’ve been in for more than a year and a half in the U.S. is not yet over, it is certainly showing promising signs of thawing.”

The expenditures index, which tracks the total amount spent on freight, fell, but it’s been falling at a lower level. In May 2016, the index fell 10.1%. It was down 6.3% in August 2016. The improvement in the index can be attributed to the rise in fuel prices over the past six months, and the rise in crude price is expected to add to this. Also, the pricing power of truckers and intermodal shippers has been improving as well. The Cass Truckload Linehaul Index, which doesn’t include fuel, fell 0.9% in November, “which was far less than the 3.5% decline it posted in September.” The Cass Intermodal Price Index, which includes fuel, increased 1.5% in December, which was the “third year-over-year increase after 21 consecutive months of decline.”

2017 OUTLOOK
Delco expects “trucking fundamentals to firm up through 2017. We’re still living with some of the sins of the past.” Pricing is still set at prices they were at a year ago, but the market is starting to turn around. He also said capacity is tightening and spot rates are firming. As the industry enters the bid season, he expects “more positive pricing.” Prices should increase 1% to 2% for the year. By the second half of the year, prices could rise between 4% and 5%

Over the next 12 months, an “offsetting trend” to the improving freight fundamentals will be the rising cost of driver wage increases. Looking back 15 years, overall truckload rates and labor costs “tend to coincide with one another,” meaning “carriers have effectively been able to cover” rising wages with rate increases, according to Delco. In the past few months, several carriers have announced driver wage increases, and others are offering sign-on bonuses as incentives.

J.B. Hunt has sought a third-party review of how revenue is shared between the company and BNSF Railway. The review request regards the two companies’ joint service agreement and how revenue has been shared under the agreement since May 1, 2016. A similar review has not taken place in more than 10 years, and the company considered this part of the “normal course of business.”

Delco doesn’t foresee the results of the review to “have a material impact on financial results or operations.” J.B. Hunt’s intermodal segment, which accounted for $449.768 million or 62% of its operating income in fiscal 2016, started in 1989 when the company formed a partnership with what is now BNSF Railway.