Construction is set to begin on “The Greens,” an estimated $6 million apartment complex adjacent to the Arkansas College of Osteopathic Medicine that will serve as student housing for some of the 150 students in the college’s fall 2017 inaugural class.

The 84-unit facility will include a swimming pool, exercise room, pavilion with fire pit, garden area and student study rooms. Tom Webb, vice president and chief operating officer of the Arkansas Colleges of Health Education (ACHE), said pre-construction work is finished and construction is scheduled to wrap up before students arrive.

Officials with ACHE have a groundbreaking ceremony planned for 11 a.m., Dec. 15, at the site, which is located immediately south of the college.

The college opened to the public on Aug. 20, and officials have been hiring faculty and staff, and interviewing prospective students. Work began in February 2015 on the $32.4 million facility located in the Chaffee Crossing area. The school is housed in the three story, 102,000-square-foot building, and a fully operational osteopathic college is expected to serve about 600 students. Each class will have 150 students.

The college is part of the ACHE, which was created with primary support from The Degen Foundation, a Fort Smith-based philanthropy created with some of the revenue from the 2009 sale of Sparks Health System to then Naples, Fla.-based Health Management Associates. As of June 30, 2015, The Degen Foundation reported assets of $74.843 million, with $63.629 million restricted for ACHE. The college also has received a $14 million anonymous donation and has access to a $25 million low-interest loan.

Kyle Parker, ACHE president and CEO, said a one-bedroom, one-bath unit will rent for about $650 a month, and the cost will include all utilities, trash service, and cable. In fact, the units will be hard wired into the school’s information network. Parker said the relatively low cost will be attractive to students and provide enough money for the school to re-invest in facility maintenance and operations. Also, the $6 million does not include land cost. The Fort Chaffee Redevelopment Authority donated 200 acres to the ACHE. 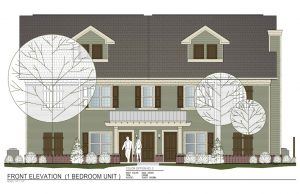 “We’re not looking for a return that you would see in a for-profit venture. … Our mission is not about how much profit we can make, it’s about how many lives we can change,” Parker told Talk Business & Politics.

Parker said the student apartments will have a “house-look” so they fit in with planned future residential housing zoned for adjacent portions of the 200-acre master plan.

“These aren’t your typical apartments. They will be very, very well made apartments with granite countertops … and a lot of other nice features,” Parker said.

Also under construction near the new college is a $7.9 million Mercy Clinic-Fort Smith facility. The clinic is part of a collaboration with the college to provide space for a recently approved residency program. The 13,500-square-foot clinic will house eight physicians, three advanced practitioners and around 30 support staff. The clinic will include 28 exam rooms, x-ray, triage, laboratory and conference space for the residency program training requirements.

Previous post
The Supply Side brief: IRI joins with Clavis Insight for a new service to retail suppliers
Next post
The push to sell Arkansas rice and chicken in China