State elections officials are preparing for a deluge at the polls on Tuesday as early voting in Arkansas soared to new heights over the past two weeks, easily besting previous records set in 2008 and 2012, according to preliminary numbers from the office of Secretary of State Mark Martin.

On Monday (Nov. 7), the final day of early voting before the nation chooses its 45th president tomorrow, state election officials said at least one-third of the state’s electorate has already voted in the 2016 general election thus far. According to Secretary of State spokesman Chris Powell, there were 22,184 early votes cast as of 4 p.m. Monday, bringing the tally to 587,453. That tally could easily surpass 600,000 with one hour before polls close statewide and county election commission officials prepare for the final day of the 2016 to begin in the morning.

For those voting on Election Day tomorrow, the top election official in the county with the largest number of registered voters offered this advice.

“I would go early,” said Pulaski County Clerk Larry Crane. “If you have to wait, it is better to wait early and get it done.”

Crane said Pulaski County Election Commission officials opened two lines to ease the wait on the last day of early voting Monday at the county’s largest precinct in downtown Little Rock. At 10 a.m. Monday, two hours after the Markham Street precinct had opened, lines snaked around the building at the foot of the Broadway Bridge, where most voters waited patiently by passing the time sending texts or doing other task on their smartphones, or were busy chatting with other voters about the election.

One Little Rock man, who asked to not to be identified, said he planned to vote for Donald Trump and the ballot item to legalize medicinal marijuana, but did not know what other issues were on the ballot although a sign-carrying volunteer for the Democratic candidate for U.S. Senate was asking for votes across the street.

“I have been waiting for about 40 minutes and this line hasn’t moved much yet, but I am going to be here until I vote – even if I have to take off the rest of the day,” said the Trump supporter.

RECORD TURNOUT EXPECTED
From early voting tabulations, state elections officials are expecting a record turnout that will surpass the past two hotly contested president elections in 2008 and 2012 and the 2014 general election. In the 2012 election, there were 1,078,548 ballots cast among the state’s 1,618,320 registered voters, which represented a 66.65% turnout in the election that pitted President Barack Obama against Republican challenger Mitt Romney. 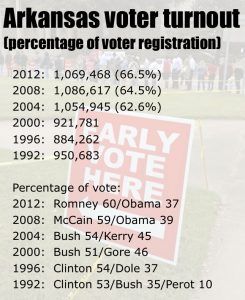 That year, Romney and running mate Paul Ryan easily swept the state with 60.57%, or 647,744 of the popular vote. Although the Obama-Biden ticket easily won the national election, the Democratic presidential pair received only 394,409 of the votes cast in Arkansas, which represented 36.68% of the more than 1 million of the total votes.

In the week ahead of 2016 early voting that began on Oct. 24, the Secretary of State’s office reported a record 1,754,243 Arkansas citizens had registered for the November president election pitting Republican candidate Donald Trump against the Democratic Party challenger Hillary Clinton in the race to the White House.

“A massive showing by Republicans inside Arkansas will have a significant ripple effect into the 2018 election cycle,” said Vickery, managing partner at Little Rock-based Capitol Advisors Group. “It’s hard to imagine the Governor, Lt. Governor, or Attorney General having significant opposition in a political environment that is so heavily dominated by Republicans. And the money advantage that Republican incumbents will have means it political suicide to try and challenge them just 24 months removed for a big showing.”

“Trump will win all of Arkansas’ 6 electoral votes,” Yates said. “The record numbers of early voters could widen the margin of Victory Trump experiences here in Arkansas, but it will deliver a solid and expected Trump victory on Tuesday.”

Democratic consultant Michael Cook agreed that a Trump victory in Arkansas is already sealed, but said the high voter turnout has traditionally favored the Democratic Party in state races. He said a number of counties across the state are seeing strong support for Democratic candidates, including some in tight races against GOP candidates.

“Democratic voters are sometimes tougher to get to the polls, but with a high voter turnout … in some of these legislative races, I think you will see some positive surprises come Tuesday night,” Cook said.

COUNTY ELECTION OFFICIALS SEE LARGE TURNOUT
In the state’s largest county by population, some voters were waiting more than an hour on the last day of early voting in downtown Little Rock. Still, Pulaski County Clerk Larry Crane said he was pleased by the work of his staff and the county election commission over the past two weeks.

According to the latest tabulations from Pulaski County, there were 76,417 early votes and 3375 absentee ballots cast before the last day of early voting today.

“As far as our piece of the election process, our plan my staff put together to put resources in place, putting the computer terminals in place and get the telephone lines set and everything else, it has really worked out well. I couldn’t be prouder of my staff and the job that they’ve done,” said Crane.

However, the Pulaski County clerk and election official said there were some technical glitches as with all elections, but voters have not had any problems casting their votes thus far. In preparation for election day voting, which runs from 7:30 a.m. to 7:30 p.m. in Pulaski County, Crane advises voters to check online to check their specific ballot and make it to the polls as early as possible. Crane said voters should expect to wait in line at their particular precinct, even though more than one-third of registered voters will already have cast their ballot before the final day of the election.

In Sebastian County, early voter turnout was at 27,347 as of noon on Monday, Nov. 7, an increase of approximately 53.1% from 2012’s 17,861 when Obama won his second term to the White House, and up 51% from 2008’s 18,103 when Obama became the first African-American President in the country’s history. Sebastian County Clerk Sharon Brooks said week two of early voting saw increased activity from the first week’s 12,000 ballots cast, adding that on the final day, traffic was steady with 1,464 in the first four hours of the day.

As of September, Sebastian County had listed 72,696 registered voters with a population of 125,744.

“I have been here 15 years, and this is the biggest early voting I’ve seen,” said Donna Metheny, who works with voter registration in the Crawford County Clerk’s Office.

MORE THAN 42 MILLION AMERICANS VOTED EARLY
Nationally, according to the latest numbers compiled by the United States Elections Project and the Associated Press, a total of 42.2 million Americans had cast early ballots one week before the Nov. 8 general election.

On Monday, as the U.S. Department of Justice said its Civil Rights Division plans to deploy more than 500 people to 67 jurisdictions in 28 states for the Nov. 8 general election.

“The bedrock of our democracy is the right to vote, and the Department of Justice works tirelessly to uphold that right not only on Election Day, but every day,” Attorney General Loretta Lynch said in a statement. “As always, our personnel will perform these duties impartially, with one goal in mind: to see to it that every eligible voter can participate in our elections to the full extent that federal law provides.”

No federal monitors from the DOJ will be deployed in Arkansas.