Retail giant Walmart U.S. will kick off its digital Black Friday sales in Arkansas at 11:01 p.m. the night before Thanksgiving Day, three hours earlier than last year. On the East Coast the official time is 12:01 a.m. Thanksgiving Day (Nov. 24) which is still well before the in-store sales begin at 6 p.m. local time that same evening.

Walmart has also already made its Black Friday store circular available through the Walmart app.

“I said it before and I will say it again, we will win the season on price – on Black Friday, on Cyber Monday and every day before and after,” said Steve Bratspies, chief merchandising officer, Walmart U.S.

In a blog post on the retailer’s website Bratspies added, “That means delivering the Black Friday deals we’re known for in stores, online and on our app. And, we’ve secured significant availability of these items. Our goal is not to advertise a great price and then not have the product for the customer.”

Walmart said it will use the wristband system for certain Black Friday and Thanksgiving Night in-store sales promotions. A common shopper complaint in years past has been there was not enough product for the demand, and even though they waited in line they were not always guaranteed the deal because supply was too short.

Walmart Store Manager in Rogers, Tina Budnaitus, told Talk Business & Politics they have planned for the Thanksgiving Night and Black Friday sales since August. She said the store maps available with the Walmart app are given out ahead of time so shoppers can plan their route during the busy shopping time. She said this year the stores will use colored balloons in certain areas to signify the product category such as yellow for the toys. She said the balloons are easily seen across the store even when it’s crowded.

“This year those giving out wristbands will be told not to give out wristbands that outnumber the product inventory. We are serious about this,” she said. “The stores will be completely staffed, all registers open and we have additional security personnel to ensure everyone’s safety.”

She said the $99 drone and the virtual reality headsets are first-time items this year for the Walmart in-store Black Friday deals.

“It will be interesting to see how those sell,” she said.

A majority of the electronic and toy deals are online exclusives for the second year in row at Walmart. In hopes of selling more online Walmart said it ramped up its merchandise for online-only deals by 50% over last year. One thing Walmart did not change is that it is not offering free shipping deals outside the norm during the holiday period, despite Target’s free shipping offers. Target is also offering certain Black Friday deals on its website beginning Thanksgiving morning. Target plans to open its physical stores at 6 p.m. local time Thanksgiving Day. 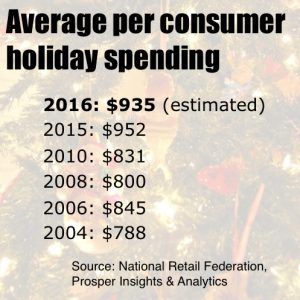 “Our customers have voted at the doors year after year, and they continue to want the option to get an early start on their holiday shopping lists,” Joe Venezia, executive vice president of global store operations at Toys R Us, said in a statement.

Kantar Research projects retail sales growth of 3.8% for the fourth quarter, a slight increase over the 3.4% growth in the year-ago period. Kantar also expects the majority of the growth this year will be driven by online sales, which it says will increase nearly 16%. Brick-and-mortar growth will be a modest 2%, the same as last year.

BLACK FRIDAY IMPACT
How much do Black Friday sales really matter for retailers and their bottom line? Analysts say it’s hard to know the exact impact of that one day because the buying habits of consumers have changed so much in recent years. That said, the year-end shopping season, which typically spans November and December, can account from 20% to 40% of retailer’s annual sales.

The National Retail Federation expects holiday sales to grow 3.6% this year to more than $655.8 billion. NRF expects American consumers to spend an average of $935.58 this holiday shopping season, based on its annual survey of consumers conducted by Prosper Insight. Per capita spending is expected to dip 1.78% from last year’s $952.58 all-time high.

The trade group said consumers cite a slight cautiousness in spending this year in part because of the election and the uncertainty of the administration change. Close to half of consumers have been tackling their holiday lists early again this year, with 41% saying they started shopping in October or earlier, according to the NRF survey.

“While many holiday shoppers are starting early on their gift lists, Millennials are waiting to catch the best deals for their gifts, with nearly half (46%) waiting until November to start shopping,” said Prosper Insights Principal Analyst Pam Goodfellow. “Younger consumers are likely to be looking forward to the Thanksgiving/Black Friday shopping ‘experience’ — and know that retailers will be offering great promotions that weekend.”

Charles O’Shea, senior retail analyst with Moody’s, has said retailers are in better shape this holiday season because of improved inventory control. He said shoppers out on Thanksgiving Night and Black Friday are not shopping they are buying, scouring for the best deals. He said how much retailer’s really make on the discounted deals varies widely and it’s more about taking share than padding bottom line.

ADDITIONAL LABOR COSTS
Not only are prices extremely discounted but store labor costs are also higher during the holiday season which also squeezes margins.

“Lower prices and job growth will stimulate more holiday shopping activity this year,” said Doug Hermanson, principal economist with Kantar Retail. “On the other hand, falling prices will create a tough environment for topline retail sales growth. And while expectations of stronger than average e-commerce growth this holiday won’t surprise many, the distance at which e-commerce will lead brick-and-mortar growth will be much wider than recent years.”

Retail hiring for the last three months of 2016 is expected to be about the same as last year’s 738,800 seasonal job as reported by Challenger, Gray & Christmas. The global outplacement consultant firm said in retail stores the number is stagnant but higher in warehousing and transportation as e-commerce takes a bigger share of the overall spend.

Amazon has announced the hiring of 120,000 temporary workers to handle holiday demand, up 20% from the 100,000 hired in 2015. Target plans to hire almost 80,000 seasonal employees, the majority of those (70,000) are for stores and about 8,000 are for warehousing and fulfillment centers related to online sales. JCPenney has said it will hire 40,000 holiday workers, about 2,000 to support online orders. Kohl’s will hire 69,000 this year which includes in-store and warehouse fulfillment.

Walmart has not disclosed its holiday hiring plan this year. Last year the retail giant announced in September it would hire 60,000 for the holiday season.

Macy’s will hire 83,000 for positions at Macy’s and Bloomingdale’s. Those jobs are are in stores, call centers and distribution and fulfillment.

Logistics giants United Parcel Service (UPS) will hire 95,000 seasonal workers who do a majority of loading and unloading trucks. The U.S. Postal Service will hire 35,000 workers this year, up from 29,000 last year. Federal Express has not yet disclosed its holiday hiring plans.