It’s been almost four years since a partnership was signed between Arkansas State University and an investment consortium in Mexico to build an American-style college campus in Queretaro. The college is expected to see its first students in 2017.

The ASU-Queretaro campus is enrolling students, and the campus is slated to begin classes in 2017, ASU-Jonesboro Chancellor Doug Whitlock told Talk Business & Politics. The $75 million project is funded by private investment capital provided by businessman Ricardo Gonzales and his consortium partners, he said.

“I’ve really never seen anything like this … it’s one of the most exciting things I’ve seen since I’ve been in higher education,” Whitlock said. “There is no capital investment by Arkansas State University.”

The university and investment group have a unique arrangement in which ASU will hire the teachers, set the curriculum, and provide other administrative services to the newly formed college. Classes will be taught in English and degrees will be valid in Mexico and the United States.

The curriculum will be set by ASU each year, meaning students who take the same classes will receive the same instruction whether it’s at a campus in Arkansas or in Mexico, he said. The campus will be replete with signs and symbols of ASU’s mascot, the Red Wolf.

ASU will receive $1,600 per student, per year once the enrollment numbers reach 5,000, according to the school. ASU will receive an $8 million windfall each year once the school is fully operational. When asked why the investment consortium would pay millions each year for ASU’s branding rights, curriculum, and other services, Whitlock said the investors involved are building a new workforce in that part of Mexico.

Queretaro, located in north-central Mexico about 200 miles north of Mexico City, is a technology and industrial hub in the country. At least 1,300 international companies have offices in the city. Gonzalez, who has worked in the banking and food product sectors, partnered with his investors to create an educated workforce to fill the needs of the companies, Whitlock said. There is also an impetus by the group to raise education levels and the quality of life in the country, he said. 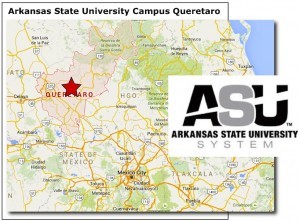 The college sits on a 370-acre swath and is part of a much larger project envisioned by the investment group. The vision is to build an entire community in the desert with homes, retail shopping markets, parks, and other amenities. The investors hope to attract the best students in the region and provide them with a high quality of life, Whitlock said.

“The goal of the campus is to supply the growing demand generated by the state of professionals in the automotive, aerospace, appliance, and biotechnology areas,” Gonzalez said in a released statement.

ASU’s expenses in this project are few, Whitlock said. Curriculum development, for the most part, will be part of the curriculum that has already been budgeted, meaning there is no real extra expense. ASU-Queretaro will be administrated by a non-profit Mexican organization, and the bills for the campus will be paid through the organization, Whitlock said.

Officials hope to attract at least 1,000 students by the time school begins in late summer 2017. The goal is to have 5,000 students per year within the next four or five years, Whitlock said.

The opportunity reaches beyond the dollars collected by ASU, Whitlock said. The arrangement will allow the university to expand its proverbial footprint on an international level. Exchanges between students and teachers in the United States and Mexico are almost certain to occur, he said.

“This is a profound opportunity … every once in awhile something really great happens,” Whitlock said.