The train broke down, and it prompted Memphis physician George Buford and his wife to take a walk.

Their train was stranded in Hardy, an insignificant way station located in the northeast Arkansas portion of the Ozark Mountains. The couple ventured up a hill near the tracks. The view mesmerized them.

Below they noticed the Spring River, perhaps the most unique river in Arkansas. It was 1908. The couple was about to start a tourism boon in scantily populated Sharp and Fulton counties that has lasted for more than 100 years.

Canoeing enthusiasts, campers, fishermen, antique hunters, and others have been inundating the region since the Buford’s made their fateful walk up Wahpeton Hill. These tourists spend millions of dollars in one of the most impoverished regions in the country.

The river is easily the second most important tourist attraction in the region, trailing only Mountain View in revenue generated, Ozark Gateway Tourism Council Executive Director Cathy Drew told Talk Business & Politics. In 2014, Mountain View had almost $78 million in tourism and driving impacts, according to the state. When you combine Fulton and Sharp counties, the tourism impact is almost identical to Mountain View, she said.

But, the river is also plagued by violence, spurred by the same tourists who flood local shops with cash, conundrum at best.

“Our area is definitely a tourist area,” Spring River Chamber of Commerce Board Member Laura Sackett Clute told Talk Business & Politics. “It does bring with it some problems.” 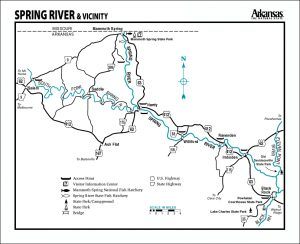 The Spring River is unlike any other river in Arkansas. It’s spawned from the Mammoth Spring, the second largest natural spring in the Ozarks. The river is 57 miles long and snakes from the Missouri border through Fulton, and Sharp counties before it meets the Black River in Lawrence County. The 16-mile stretch from Mammoth Spring to Hardy is the most popular section of the river.

Because it’s fueled by a spring, the river level doesn’t drop in the summertime and remains a constant 58 degrees. Dr. Buford and his wife began to visit the area frequently in the summer and even built cottages in 1912 to accommodate other visitors. A successful tourism trade took hold. In the 1930s, the local population would double from 500 residents to more than 1,000 in the summer months. Campgrounds, canoe rentals, restaurants, hotels, and other tourist businesses cropped up from Mammoth Spring to Hardy.

TROUBLES ON SPRING RIVER
The tourist wave continues to this day, but it comes with a cost. When the big three summer holidays hit – Memorial Day, Fourth of July, and Labor Day – the population in the region swells by as many as 15,000 people, according to the chamber.

Drunken brawls, littering, public nudity, and rowdy behavior are common. Obscenity is so prevalent that Cosmopolitan magazine once rated the river one of the top 10 “party” rivers in the entire country. The Spring River was also featured in 2009 when Tru-TV filmed an episode of Party Heat there. The river also was a prominent backdrop in the Discovery Channel television reality series, Clash of the Ozarks, in 2014.

Law enforcement agencies face the daunting task of policing the river and the roads in and around it. The Spring River is located in a desolate stretch of rural Fulton and Sharp counties. It runs almost parallel with U.S. 63. It’s not uncommon to see sheriffs’ deputies from both counties patrolling the highway, and DWI arrests are frequent.

Calculating the number of criminal incidents on the river is difficult. Many agencies don’t tabulate misdemeanors in specific geographical areas. The Arkansas Game and Fish Commission patrols the river and riverbanks, and in 2009, the agency took steps to curtail violence on the river. That year the agency reported 147 criminal incidents on the river worked by their officers. Those included littering, drug and alcohol abuse, nudity and others. At least 44 of those were directly related to drugs and alcohol.

The river is safer, but criminal acts on the river remain a concern, Clute and Drew admitted.

A REAL ESTATE BENEFIT
Tourism revenue statistics for 2015 were not available, but there has been a dramatic rise in tourism in the region during the last few years, Drew said. Sharp County’s tourism and travel revenue jumped from $36 million in 2013 to $48 million in 2014, according to the state, a 33% increase.

A concerted effort to promote the area by local A&P commissions, the chamber, and Ozark Gateway partially led to the surge, Drew said. Two other factors also contributed, she added. The U.S. economy improved and gas prices have consistently been below $2.50 per gallon in recent years, meaning it’s cheaper to drive and consumers have more disposable income, she said.

Tourists don’t only visit. Many come back to retire, Clute said. She’s been a Realtor in the region since 2010. Finite statistics haven’t been tabulated, but when she shows houses to out of town clients it’s common for them to have visited the area before. Cherokee Village, one of the first retirement communities ever established in the country is only a few miles away and is also located in both counties.

“We sell a lot of houses to people who’ve been here before,” she said. “The river is extremely important in real estate.”

The Spring River’s position as the economic life-blood artery in the region is firmly established. Sharp County shares similar population numbers to nearby Lawrence, Randolph, and Jackson counties. It brings in more tourist dollars than all three combined, according to the state.

The rowdy and lewd behavior is an unfortunate side-effect, but Drew is hopeful incidents on the river can be held to a minimum, she said.

“I try not to pay a lot of attention to negative stuff … I honestly don’t hear a lot of negativity,” she said. “I just encourage people to enjoy the river, and do so responsibly.”