Editor’s note: The research for this voter profile analysis was underwritten by the Arkansas State Chamber of Commerce and the Electric Cooperatives of Arkansas.
–––––––––––––––––––––

Not only has the 2016 presidential election cycle deviated from the typical – or expected – script, but detailed analysis by ChamberLeads.com using Little Rock-based Acxiom consumer data shows unusual demographic trends for first time voters.

ChamberLeads.com, a subsidiary of the Conway Area Chamber of Commerce, analyzed 190,000 voters in Benton, Craighead, Pulaski and Sebastian counties who had voted in the March 2016 presidential primary and/or the 2014 and 2012 general elections. The voters were matched against Acxiom’s 240 million person consumer database. The results, provided exclusively to Talk Business & Politics, were numerous voter demographic details, including age, affluence, education, consumer habits, and first-time voter patterns.

“The results were somewhat intuitive. Arkansas’s likeliest voters are much older, educated, affluent, whiter, and static than the average Arkansan. Those things are still true to a lesser degree when you compare likely voters to those who are registered but don’t vote,” noted the ChamberLeads.com analysis from Jamie Gates, executive vice president for the Conway Area Chamber of Commerce.

The analysis also noted: “The plurality of these ‘most reliable’ voters is eerily similar as we move from county to county. In short, likeliest voters around the state just aren’t that different from each other. The result is the ‘over representation’ of some demographic qualities like upper ages, incomes and education levels. That is, a higher percentage of those types households voting than you would find living in those same communities.” 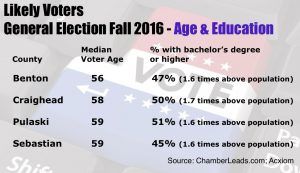 • Not surprisingly, Benton County likely voters – who reside in one of the fastest growing U.S. metro areas – ranked highest among the four counties in terms of income, with 55% having a net worth of $250,000 or higher. Pulaski was second with 49%, followed by Craighead with 44% and Sebastian with 38%.

• Pulaski County has the most educated among the likely voter pool, with 51% having a bachelor’s degree or higher. Second is Craighead with 50%, Benton with 47% and Sebastian with 45%.

NEW VOTER ANALYSIS
The ChamberLeads.com report shows that the spring partisan primaries brought many new voters to the polls for the presidential primaries with some counties reporting up to half of those voters were first-time voters.

“There are many theories as to what caused this. Did the Trump and Sanders outsider campaigns motivate new people to engage? Did ‘celebrity’ style campaigning and coverage heighten awareness among the general electorate? In summary, did a disruptive campaign ‘flush out’ a voter who has previously been nothing more than an interested observer,” noted the analysis. “It’s possible that some or all of those dynamics were at work. What we do know is that first time voters weren’t simply an expansion of the traditional voting universe. The highest performing demographic sub-groups among first time voters in the primaries were almost absent as likely voters.” 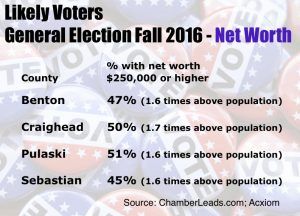 Following are some of the highlights of first-time voter analysis:
• First-time Republican voters were 20% more likely to be male. The genders were equally represented among all other voter groups.

• Likelihood of voting did not increase with net worth for first-time Democratic voters. But it did with all other voter groups.

• Childless couples and singles in their mid-30s with a household income greater than $120,000 were over represented 2.4 times among Republican first-time voters. This same demographic was under represented by 10% in the “likely voter” population.

• High-income childless singles in their late 20s were over represented 2.1 times among Democratic first-time voters. That same demographic was under represented by 50% in the “likely voter” population.

‘UNCONVENTIONAL’ NARRATIVES
The summary of the voter data, according to Gates, indicates that new voters are not a “demographic mirror of some cartoonish rally attendee.” 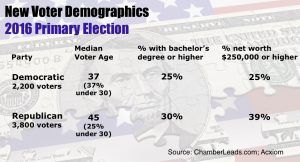 “In fact, their higher than average income or education is fueling their likelihood of voting,” noted the analysis summary. “The data does confirm some of the standard national narratives and conventional wisdom. Unconventional candidates are visibly attracting not only new voters, but a new type of voter.”

Gates also provided a warning for pundits, pollsters, and campaign managers based upon the data.

“New voters at the polls means new models are required for any successful candidate and cause on the ballot. Assumptions built on old models and polling are still meaningful but they will apply to a smaller percentage of the electorate. The models are even shakier as you look down the ticket,” he said. “It’s likely that there is a new type of voter coming to the polls this fall. Candidates, campaigns and causes must rely on more than voting history and a few data points to accurately predict who they are.”