Editor’s note: The Arkansas Energy Report is produced monthly and is sponsored by the Arkansas State Chamber of Commerce/Associated Industries of Arkansas, and MISO (Midcontinent Independent System Operator). Talk Business & Politics makes every effort to use information current at time of posting.
––––––––––––––
Severance tax collections for the first two months of fiscal 2017 are well below years ago levels as Fayetteville Shale drillers continue to limit marketed sales of natural gas to selected wells already drilled, developed and in production.

Even though Arkansas severance tax collections for natural gas and crude oil is well off previous years when oil and gas prices were trading higher, they have not had the impact on overall state revenue collections as in other energy-producing states such as Oklahoma, Texas, Alaska and Louisiana.

Last week, Texas Comptroller said Texas’ revenue picture was nearly $1 billion worse than forecasted due to declining oil and gas prices. In Texas, oil production and regulation tax revenue was $1.7 billion, 7.6% below estimates of $1.8 billion, while natural gas tax revenue was $579 million, 33.6% below projections of $871 million. 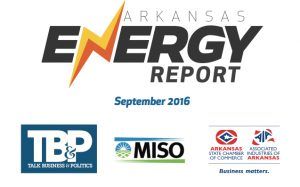 • Gasoline prices in Arkansas and across the rest of the U.S. are expected to gradually move lower as U.S. refineries change over from summer-blend to a cheaper-to-produce winter-blend gasoline.

• There has been a slight uptick in drilling permits in August and September, according to data from the Arkansas Oil and Gas Commission. Southwestern Energy and other Fayetteville Shale drillers have indicated in the past that would likely increase drilling and production activity in natural gas prices moved above the breakeven level of $3 per million British Thermal units (MMBtu).

• The influential Interstate Oil & Gas Compact Commission will hold its annual conference in Little Rock on Oct. 2-4, where Gov. Asa Hutchinson will take over as head of the multistate government agency from outgoing chair, Gov. Mary Fallin of Oklahoma.

Link here for the PDF of the September 2016 Arkansas Energy Report.