Farming is a profession often not pursued by younger generations, which has pushed the average age of the American farmer to 58. The rising average age raises the question of what might happen with family farms, a topic addressed Monday (Aug. 29) by U.S. Department of Agriculture Deputy Secretary Michael Scuse.

Scuse spoke on the topic of land tenure, ownership and transfer at the University of Arkansas on Monday at the USDA New Farmers and Land Tenure forum, one of 10 events the agency will hold around the country this fall.

He said for new farmers and ranchers must take the reins for farm communities to remain successful, but there is concern the expense of acquiring or renting land is cost prohibitive for the next generation – unless they are among the 14% that will get the land they need passed down from family. Scuse said 39% of  911 million acres of U.S. farmland in use today is rented, but the biggest challenge young farmers face in securing enough land for their operations.

LOCAL CONCERN, LAND OWNERSHIP
Benton County Extension Agent Johnny Gunsaulis said the high price of land in Northwest Arkansas has been a concern among farmers more than two decades. He said land prices are so high they outweigh the farm income potential. He said families often face how to divide the farm and too often the one who wants to farm can’t get the money needed to buy out siblings.

“High land prices and limited access of farmland transformed the poultry industry over the past few decades to small farms that are covered up with chicken houses. It’s important that we protect and pass along our farmland to other farmers,” Gunsaulis said. “It’s always seemed odd to me that we have Wetland preservation requirements of developers, if they build on wetlands, they have to create the same amount of wetland acreage somewhere else. But there is no such requirement for farmland preservation.”

The report found 45% of U.S. farmland is in small family farms, and 46% of this land is found in operations that own all the land they operate. About 51% of land in farms is in midsized and larger family farm operations, which are most commonly a mixture of rented and owned land. Nonfamily farms account for 4% of all farmland, 28% of which is found in full-owner operations.

He also shared the fastest growing segment in farming today is women farmers, now nearly 1 million in number. Scuse said the local food market is helping that initiative as it doesn’t take a large area for a garden that can supplier farmers with produce sold throughout the spring, summer and fall at farmer’s markets and other local outlets.

“It is very difficult for new farmers to get involved in agriculture because there is limited land available and our efforts are geared toward finding solutions that help to ease the barriers of entry for the next generation,” Scuse said. “Nearly 40% of the land farmed today is owned by folks who don’t farm and have never farmed. Their farms are being rented out to someone else, but what happens when that land is going to be transferred to another family member? How can we make sure the next generation of farmers will be able to access that land, how can they afford it, what do we need to do with loan programs and tax structures to encourage landowners to sell to new farmers, without incurring a massive capital gains tax? These are topics we are focusing on and discussing today.”

Scuse said the Land Tenure Task Force formed by Vilsack compiled around 50 recommendations on the topic which are part of the Farm Bill. He said USDA is working with new farmers to give them a risk offset credit which allows more to take advantage of crop insurance as a way to mitigate losses in the early capital intensive years of farming.

LAND CONSERVATION, SELLING DEVELOPMENT RIGHTS
Talk Business & Politics asked Scuse about the pressures of real estate development encroaching on farms around the region and country. He said as population continues to grow there will continue to be pressure on farmers to sell to developers. In Benton County that was a common occurrence between 2000 and 2005. In Delaware, where Scuse runs three family farms, he said the state’s conservation efforts allowed him to sell his development rights for cash. In essence this gives him a development easement which means the land cannot be touched for commercial or residential development.

Scuse said many states and townships have funds available to buy development rights from family farmers when they want to ensure the green space is protected for farming ventures.

“It’s a great option for aging farmers to sell their development rights. It puts cash in the bank for their retirement and they still own and can farm the land. They can also rent it out for farm use if they don’t pass the land to another family member for farming. It’s a great farm conservation tool,” Scuse said. 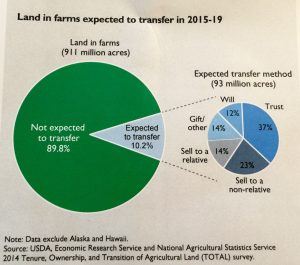 Gunsaulis knew of no such development rights program in place in Arkansas. But he said the Northwest Arkansas Regional Planning Commission does have an Open Space Plan that aims at raising public awareness about the importance of green space and farmland conservation.

The Open Spaces Plan allows for and recommends willing landowners to donate properties for conservation through an easement which can preserve the land for farming, said Elizabeth Bowen of the NWA Regional Planning Commission. She also knew of no development rights program in place for Arkansas farmers.

AGRI-FUTURE
Scuse said 15% of the U.S. population lives in rural America and protecting farmland is crucial to those economic communities.

“If we don’t work together on this issue there will be a negative impact on the economy at large and hundreds of rural communities around the country,” Scuse said.

University of Arkansas Chancellor Joseph Steinmetz also spoke at the forum and echoed the importance of agriculture around the state.

“Agriculture is absolutely critical to Arkansas’ future and its fortunes. It’s the state’s largest industry representing one-quarter of the Arkansas’ economic activity and one-sixth of the jobs around the state,” Steinmetz said. “We are tops nationally in rice and bait fish production, number two in broilers and number three in catfish, cotton and turkey production and that’s not bad for a state the size of Arkansas. We are a top 10 producer of things like timber, eggs, soybeans and grain sorghum.”