A recent presentation by Southwestern Energy Inc. reaffirms new hope for Arkansas’ Fayetteville Shale Play as the independent oil and gas company has substantially revised its 2016 guidance for production, earnings and capital spending.

According to a 36-page investor presentation called a “Strong Bridge Forward” that was posted to the company’s website and filed with the federal Securities and Exchange Commission on Aug. 1, newly-hired Southwestern CEO and President Bill Way gives investors the first complete look at his strategic vision to turn around the company’s fortunes in the industry current low commodity price environment.

In the revised 2016 guidance, Southwestern has upped its capital spending nearly 94% from a range $360 million to $400 million to $725 million to $775 million. Although that is well below the year ago capital spending of $1.8 billion, the new spending levels offers optimism for higher capital outlays across the Arkansas shale play for the rest of 2016 and into early 2017.

Even with natural gas prices well under the $3 per British thermal (MMBtu) in the unconventional Arkansas shale play, the Texas driller notes that the company’s “vast upstream and midstream assets in Fayetteville (are) generating substantial cash flow.” As part of Way’s plan to make the company profitable again, the Southwestern CEO’s presentation to Wall Street shows that he plans to focus primarily on the company’s “premier quality assets” in Northwest and Southwest Appalachia and the Fayetteville Shale. Since taking over as CEO in January, Way has focused on restructuring the company’s finances in order to jumpstart the company’s stalled drilling program again.

In a review of the company’s capital spend and production split for the remainder of fiscal 2016, the investor presentation shows that production will gradually increase in the Arkansas shale play as the price of gas moves higher. In fact, the company has revised its originally guidance oil and gas guidance of $2.35 per MMBtu/$35 per barrel up to $2.45 per MMBtu/$45 per barrel up. At the price of nearly $2.62 on the New York Mercantile Exchange, Southwestern’s new guidance shows it is prepared to continue to drill under the $3 level as long as prices don’t fall below its forecast.

While the new guidance doesn’t mean the Fayetteville Shale will see capital spending levels of $500 million and $1 billion during the height of production only a few years ago, it does mean that the company is continuing to develop the Arkansas play over the long-term. For instance, Southwestern’s plans show the Texas driller will increase production to 500 drilling locations if the price of natural gas moves to $3 per MMbtu. If prices move to $4 or higher, then Southwestern is prepared to adjust its production level up to as many as 4,300 drilling locations.

FAYETTEVILLE SHALE STILL PRODUCING ‘HIGH QUALITY’ CASH FLOW
At the end of fiscal 2015, the Southwestern owned 958,000 net acres and had 3,724 producing operated horizontal in the Arkansas shale play that had proved reserves of 3.3 trillion cubic feet. 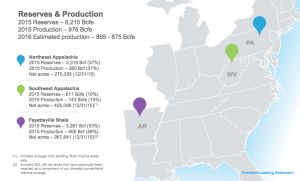 “We plan to drill approximately 7 to 10 wells and complete approximately 36 to 39 wells in the second half of 2016,” the company noted.

“Our exact needs will depend on how our capital spending evolves, which itself depends on commodity prices, geographic location of projects and other factors,” said Southwestern Energy spokeswoman Christina Fowler.

Those plans came after the company revealed in the second quarter it had negotiated deals with Wall Street lenders and banks to strengthen its balance sheet and liquidity profile through a combination of extended bank agreements, and successfully issuing equity, launching and concluding tender offers for debt and negotiating long-dated inventory monetization.

That improved financial position, company officials, would allow it to activate a plan to accelerate investment of $500 million into “high-return” projects within each of the company’s core assets, including the Fayetteville Shale. Nearly $375 million of that capital is expected to be invested by the end of 2016, officials said. That second quarter review was the first glimpse at Way’s strategic efforts to turn around the company by reinitiating a companywide drilling and completion program that will bring five new drilling rigs back into operation for the rest of 2016, including one new rig and a healthy $73 million in capital spend in the Arkansas shale play.

Even though most Wall Street analysts have “sell” or “hold” ratings for Southwestern’s stock, Wall Street analysts are slowing taking note of Way’s strategic changes. On Monday, Jefferies Group analyst Jonathan Wolff increased his third quarter earnings forecast for the Texas driller to 10 cents per share, up from his previous forecast of four cents per share. Citigroup, on Monday, also raised its yearly price target for the company from $8 to $14 per share.