The overall health of four key Arkansas metro areas was relatively unchanged but strong in the first quarter of 2016, with the regions posting impressive job gains and increased construction activity, according to The Compass Report.

The quarterly Compass Report is managed by Talk Business & Politics, and is sponsored by Lowell-based Zero Mountain Logistics, a subsidiary of Fort Smith-based Zero Mountain Inc. The report is the only independent analysis of economic conditions in four Arkansas metro areas – Central Arkansas, Northwest Arkansas, Fort Smith metro, and the Jonesboro metro. Underwriting support of The Compass Report is also provided by Cox Communications and the Fort Smith Regional Chamber of Commerce.

Jeff Collins, the economist for Talk Business & Politics who gathers data used in The Compass Report, said relatively low prices, upward pressure on wages and continued strength in business investment in the U.S. should continue to help Arkansas’ economy.

“Despite the doom and gloom of the political season the economic data, both at the national and local level, were solid for the first quarter,” Collins noted in the report.

Collins, a former director of the Center for Business and Economic Research at the University of Arkansas, said any action from Washington, D.C., having a positive or negative impact on the national economy is unlikely.

“The economic outlook is unlikely to be impacted significantly by governmental policy given the stalemate in Washington and the election season in full swing. Factors likely to have significant impact include reduced monetary stimulus offset by lower commodity prices, rebounding labor and housing markets, uncertainty from the British withdrawal from the European Union, weak economic performance in Europe and Asia, and the strengthening U.S. dollar,” Collins said.

Pulling the grade down slightly was a decline in energy sector related jobs and a relatively small gain in non-farm employment during the quarter. Bright spots in the quarter were improvement in the unemployment rate and steady gains in regional sales tax collections.

Although he said Fort Smith metro data is improving, Collins said the region struggles to grow job numbers at the same pace as other state metro areas.

“Data for the Fort Smith regional economy continues to disappoint. However, the substantial decline in the unemployment rate coupled with the growth in tax collections are encouraging signs,” he said.

Mark Rumsey, board chairman of Zero Mountain Inc., sees some weakness in the economy, but liked the first quarter data.

“Based on inventory levels in our operations, we have concerns about the national and state economies going forward. However, it is good to see the state economy was doing well in the first quarter of the year, and it was also welcomed relief that our economist sees encouraging signs of growth for the Fort Smith metro economy,” Rumsey said. 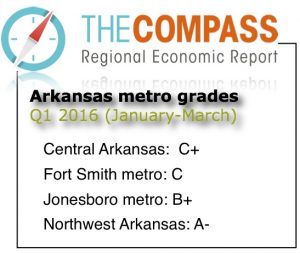 The only downsides noted in The Compass Report were relatively smaller increases in sales tax revenue and a drop in manufacturing employment.

Job gains, falling unemployment rate and consistent gains in sales tax revenue helped the region’s economy. The jobless rate was 3.6% in March, well below the 5.1% in March 2015.

Like Northwest Arkansas, tourism is also a growing part of the central Arkansas regional economy. The region had 34,800 jobs in March, up almost 3,000 jobs compared to the 31,900 in March 2015.

“Of all the economic indicators, unemployment rates at or near the full employment rate of 4.0 percent stand out. Growth has been solid if not spectacular but given the weak performance of construction, manufacturing, and government the overall performance of the regional economy was surprisingly strong,” Collins said of the metro economy.

JONESBORO METRO
The Jonesboro metro began its first quarter in The Compass Report with a B+.

Driving the positive grade were gains in overall employment, sales tax revenue and growth in new home starts. The region added 2,300 jobs between March 2015 and March 2016. The jobless rate in the Northeast Arkansas metro area fell from 5.2% in March 2015 to 3.5% in March 2016.

Collins said the region is bucking the trend with respect to manufacturing jobs.

“Employment conditions in the metro are very good relative to the state and most other metro areas. The employment data are particularly encouraging given the erosion of manufacturing employment prevalent across many metros,” Collins wrote.