As the state’s labor pool continues to grow and the jobless rate seeks new lows, U.S. workforce data shows Arkansas workers are taking home more money out of their paycheck than they ever have at any time in the past.

In 2015, Arkansas set a new record for per capita disposable income, which is the amount the workers receive from their paychecks after all taxes are deducted from their salaries. The U.S. Bureau of Economic Analysis (BEA) calculates the so-called per capita disposable income, or “DPI,” as the total personal income of the residents of a state divided by the population of the state, which the Census Bureau now puts at 2,985,310.

“Hillary Clinton’s Educational Standards Committee advanced the policy in 1983,” Kaza said. “The idea was revisited in the early 21st century after the state Supreme Court’s decision in the Lake View school finance case.” 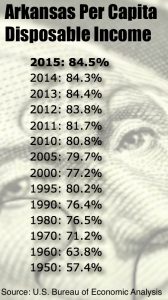 Despite the improved spending power of the state’s fast-growing labor force, Arkansas still ranks in the bottom 10 states for DPI growth at 42nd. But. Kaza noted, Arkansas’ position versus the rest of the U.S. has improved slightly over the past 25 years.

TAX CUTS PUT MORE IN WORKER POCKETS
There are a number of factors for years of steady improvement since the early 1990s, Kaza said. One reason is economic growth generated by public companies in Benton, Union and Pulaski counties, which lead the state in personal income growth.

“That’s still a far cry from 100%, but it’s worth noting that Arkansas’ rank in the metric was 42nd in the nation in 2015, ahead of states such as Arizona, New Mexico, Kentucky, Utah, South Carolina, Idaho and West Virginia,” Kaza said. “The days when ‘Thank God for Mississippi’ was Arkansas’ unofficial economic slogan are gone.”

The local economist said if the income growth path continues, Arkansas will soon remove itself from another “worst states” business list.

ARKANSAS 6TH IN PERSONAL INCOME GROWTH
Nationally, the BEA also reported on June 22 that personal income increased $37.1 billion, or 0.2%. That compares personal income growth at 0.5% or $75.4 billion in April.  Personal income, the most used widely-used metric for economic data, includes the total of an individual’s earnings, wages, dividends and other sources of before-tax income over a given period.

In a blog post concerning the BEA’s June report, University of Arkansas at Little economist Michael Pakko writes that Arkansas’ strong performance is largely attributable to the gain in better farm income. Pakko, chief economist at UALR’s Institute for Economic Advancement, also noted that mining income had experienced its 5th consecutive quarterly decline, falling 15.8% nationally since the fourth quarter of 2014.

“Over the same period, mining income in Arkansas contracted by 17.4%. Arkansas’ growth outpaced the nations in most sectors, particularly in service-providing sectors,” Pakko wrote. “However, earnings in durable goods manufacturing declined slightly in Arkansas, in contrast to a small gain nationwide.”

According to the latest BEA forecast, per capita disposable income for U.S. workers is expected to grow at an annual rate of 1.5% through 2021.

“A greater number of Americans returning to work will combine with improved housing and stock values to make consumers willing to spend on purchases delayed during the recession,” the BEA predicted. “However, future growth will be tempered relative to the boom leading up to the recent downturn.”

Previous post
Daisy Outdoor Products sold to New York private equity firm for undisclosed sum
Next post
QualChoice for sale, but no buyer yet for one of Arkansas’ largest health insurers