Gov. Asa Hutchinson recently touted to business leaders that the state has added 42,000 new jobs and reached an all-time low jobless rate of 3.9% during the first 16 months of his administration.

“And that I take credit for simply because I am governor and governor’s take credit for whatever happens on their watch,” Hutchinson said at the annual meeting of the Arkansas District Export Council held at the Governor’s Mansion in Little Rock.

“Truly, I know that has something to do with the national economy, but we are delighted in that growth and the fact that we have the lowest unemployment rates in our nation and lowest history in the history of Arkansas since we have been recording unemployment numbers,” the governor boasted. “This is good stuff: people are working now and we are growing our economy and we’ve become more competitive with our surrounding states.”

Hutchinson’s analysis that the state is growing its labor pool and employment base were drawn from April’s job report, in which the U.S. Bureau of Labor Statistics’ (BLS) data on Arkansas’s job market showed that total employment had reached an all-time high of 1,309,268 jobs.

A Talk Business & Politics analysis of the first 16 months of the job market data during the Hutchinson administration shows that Arkansas’ service-producing sectors are far outstripping the growth of the blue collar-focused goods producing sectors. Under the so-called NAICS, or North American Industry Classification System established in 1997 to replace the former Standard Industrial Classification system, the federal government is able to classify and uniformly compare data from the different sectors of the growing U.S. economy.

In Arkansas, the goods-producing industries include the manufacturing, mining and construction “supersectors,” which provide most of the working-class, blue collar jobs across the state. However, the now larger service-producing sector includes most of the faster-growing service-oriented “supersectors,” including the trade, transportation and utilities industry that employed the largest number of Arkansas workers at 258,300 at the end of April.

TECHNICAL JOBS, STARTUPS FUELS GROWTH
During the Hutchinson years, that sector has produced an additional 9,000 new jobs, most of which have come from retail and wholesale trade. Year-over-year, 8,800 new trade jobs have been created since April 2015, according to BLS data compiled by the state Department of Workforce Services (DWS). 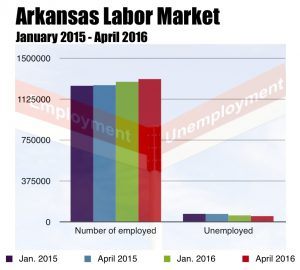 However, one of the more surprising trends in Arkansas job growth has come from the professional and business services supersector, which is the second-fastest growing segment of the state’s job market. According to the NAICs classification of the professional and business services supersector, this industry generally hires workers that have a high degree of expertise and training.

“The establishments in this sector specialize according to expertise and provide these services to clients in a variety of industries and, in some cases, to households,” BLS says.

Since Hutchinson came to office, this white collar sector has added 7,500 new jobs that have also boosted overall state wages in the same period. According to Chuck Vollmer, founder and author of the Jobeconomics blog, professional and business services growth in Arkansas is following a similar national trend that has seen “an explosion” of technical white collar jobs that also including administrative and temporary positions.

According to BLS data, the professional and business services sector added 65,000 jobs in April. Over the prior 12 months, employment growth had averaged 51,000 per month. Management and technical consulting services added 21,000 jobs over the month. Employment growth in this industry had averaged 5,000 per month over the prior 12 months. Computer systems design and related services also added another 7,000 jobs in April.

In Arkansas and nationally, startup activity is driving much of the new job additions, but Vollmer cautioned this fledgling segment of the economy has not yet proved to be a sustainable growth sector in the long run.

“There has been an explosion in this sector in that startups, the self-employed and guys that are weaving together six different business cards, so you are going to see startup (jobs) especially in this area,” said Vollmer, whose blog offers analysis on U.S. employment and unemployment size, characteristics and trends. “But the question is ‘will they (startups) be profitable?’ – but that is the same question with all the professional and business services jobs.”

Vollmer, who is a consultant for mayoral campaigns in New York City and Baltimore, also credited much of the startup activity nationwide to Generation Z workers, who he said are not suited for the nation’s traditional workforce.

“These Gen-Z workers are always interested in starting their own companies, and they are truly the ‘digital natives,’” he said.

In Arkansas, the professional business & services sector today had a total of 143,100 workers at the end of April, making it the fifth largest industry in the state behind trade, transportation and utilities; government; education and health services; and manufacturing.

In addition to new job additions, the professional business & services sector is also responsible for boosting wage growth in Northwest Arkansas. In 2015, the BLS reported that Benton County had the largest over-the-year percentage increase in weekly wages in the U.S. in 2014, with a huge spike of 9.9%. Kathy Deck, director of the Center for Business and Economic Research at the Sam M. Walton College of Business at the University of Arkansas, attributed much of that wage growth to the fast-growing professional and business services sector in the region.

HEALTHCARE FIELD JOBS SPIKING
True to his word, Hutchinson had halted the growth of government jobs during his time in office. There are 100 fewer local, state and federal government jobs in Arkansas than when the Republican governor took office. Still, at 212,900 jobs, workers on government payrolls make up the second-largest supersector in the state’s economy.

In the state’s third-largest supersector, education and health services, there have been 5,700 workers added to state payrolls since Hutchinson became governor. Much of that growth has been attributed to the impact of Medicaid expansion on the growth of the state’s insured population, which has resulted in increased hiring in the medical and health field. Jobs in the education field, however, have been growing at a much slower rate, adding only 700 new positions in the past year.

Bob Sarkar, chief executive of physician’s network within CHI St. Vincent Health System in Arkansas, told Talk Business & Politics that state and federal labor data are forecasting health jobs will grow faster than any other sector over the next decade, adding 400,000 to 500,000 jobs to the U.S. economy each year. Sarkar mentioned a widely-cited study by the Kaiser Family Foundation from August 2015 showing the state’s private option expansion dropped the state uninsured rate among non-elderly adults from 27.5% to 15.6%, and led to a 55% drop in uncompensated care in the state’s hospitals between 2013 and 2014.

“That is very commendable from the perspective of patients who didn’t use to get health care coverage. We can directly attribute that to our 245,000 covered population through our exchanges under the Medicaid expansion,” Sarkar said. “As a result, to support that kind of demand in the market and our ministries, we have to have the right caregivers to support that demand.”

The state’s reliable leisure and hospitality sector, which includes Arkansas’ robust tourism industry, has grown by 4.7% since January of 2015. There are now 114,500 workers employed in the state’s six largest supersector, up from 110,200 a year ago.

WORKING CLASS JOBS LOSE GROUND
Hutchinson cannot claim much success in adding working class, goods-producing jobs to the state’s economy, which includes the construction, mining and manufacturing sectors. The state’s manufacturing and mining sectors have been caught in cyclical downturns that have tossed thousands of blue-collar workers to the unemployment line.

For example, the mining sector, which includes the state’s oil and gas business and the once-prosperous Fayetteville Shale, has lost 21% of its workers since Hutchinson came into office. More than half of those workers were employed by former Fayetteville-based Southwestern Energy Corp. and El Dorado-based Murphy Oil Corp.

The manufacturing sector has not fared much better. Once the state’s largest job-producing sector, there are now only 153,700 factory workers on employer payrolls in Arkansas, down – from 156,000 at the beginning of 2015. At the rate of decline, Arkansas will fall below 152,000 workers later this summer.

According to historical Arkansas employment data compiled by the BLS data and maintained by DWS, the only time the number of manufacturing positions has ever fallen below that level was just over two years ago, when there were only 151,800 factory workers on payrolls in July 2013. Arkansas has never dropped below 150,000 manufacturing jobs since NAICs began keeping such data when former President Clinton was Arkansas governor.

Those job woes in the manufacturing and mining sectors leave the construction industry as the only goods-producing sector to add jobs in Hutchinson’s first 16 months as governor. At the end of April, there were 2,100 more construction workers on job sites than in January 2015, up to 49,600 positions.

If two proposed superprojects come online in 2016, those construction numbers could see a substantial boost, state economic development officials predict. Little Rock-based Energy Security Partners, led by Arkansans Ret. General Wesley Clark and former Transportation Secretary Rodney Slater, has yet to decide if it will build a $3.7 billion gas-to-liquids plant in Pine Bluff. China-based Sun Paper has signed an agreement with the state to build a $1.1 billion paper mill in Arkadelphia.