Editor’s note: The Arkansas Energy Report is produced monthly and is sponsored by the Arkansas State Chamber of Commerce/Associated Industries of Arkansas, and MISO (Midcontinent Independent System Operator). Talk Business & Politics makes every effort to use information current at time of posting.
––––––––––––––
Arkansas’ rig count remained at zero through the first four months of 2016 as Southwestern Energy and other Fayetteville Shale drillers tried to stay afloat as scant drilling activity is making it hard for oil and gas companies to generate capital.

ARKANSAS SHALE PLAY ACTIVITY
Arkansas’ rig count dwindled to one in the last week of December after Southwestern announced it was taking its final two rigs offline until natural gas prices turned around. The number of drilling rigs in Arkansas peak at 60 on July 11, 2008, when Fayetteville Shale development was in full swing, Baker Hughes statistics show. 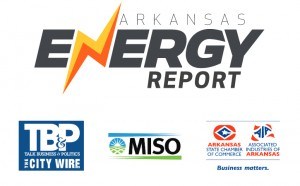 However, the Arkansas shale play played a major role in keeping Southwestern Energy above water with continued output from wells that were put into production before the Houston-based oil and gas company halted its drilling operations at the end of 2016.

According to the Haynes and Boone Oil Patch Bankruptcy Monitor, released April 16, there are now 63 North American oil and gas producers that have filed for bankruptcy since the beginning of 2015, up from 51 in January. These bankruptcies, including Chapter 7, Chapter 11, Chapter 15, and Canadian cases, involve approximately $22.5 billion in cumulative secured and unsecured debt.

OTHER ENERGY NOTES
• Arkansas motorists are paying on average about $1.98 per gallon, up seven cents from a week ago (end of April). Still, pump prices in the Natural State are 37 cents below year ago levels, when drivers were paying $2.35 per gasoline for regular unleaded, AAA data shows.

• Total electricity produced in February was 314,079 thousand megawatt hours, down 6.4% compared to February 2015.

Link to this PDF for the complete Arkansas Energy Report.

Previous post
Medical records security: Get it right and keep it safe
Next post
Fort Smith Board agrees to settlement related to dispute over riverfront trail work