Editor’s note: The Supply Side section of Talk Business & Politics focuses on the companies, organizations, issues and individuals engaged in providing products and services to retailers. The Supply Side is managed by Talk Business & Politics and sponsored by Propak Logistics.
––––––––––––––
It’s been two years since Wal-Mart Stores enthusiastically announced a deal with Boulder, Colo.,-based Wild Oats to bring 100 new organic products at lower costs to its customers. That enthusiasm has waned.

Wal-Mart is phasing out the organic food brand because the deal between private equity firm Yucaipa Cos., owner of Wild Oats, and Wal-Mart was complicated and becoming unwound, according to a Wall Street Journal report. Wal-Mart had no comment on the issue and offered no timeline for how much longer Wild Oats products will be sold in its stores. Wild Oats also did not respond to a request for comment.

It was April 9, 2014, when Wal-Mart told its customers of its plan to bring more organic foods at 25% savings over national organic brands. But the roll out of product was slower than expected.

“We know our customers are interested in purchasing organic products and, traditionally, those customers have had to pay more,” Jack Sinclair, then executive vice president of grocery at Walmart U.S. said in 2014. “We are changing that and creating a new price position for organic groceries that increases access. This is part of our ongoing effort to use our scale to deliver quality, affordable groceries to our customers.”

Sinclair, who has since left the company, said Wal-Mart’s research indicated that 91% of its shoppers would consider purchasing products from an affordable organic brand sold by Walmart.

RENEWED FOCUS ON PRICE
Charles Holley, Wal-Mart’s former chief financial officer, said in April 2015 that the Walmart-Wild Oats initiative was expected to cover a broad variety of categories and be available in about half of Wal-Mart’s 4,000 U.S. stores. But it was slow going. He said the program was still being rolled out at that time last year. Holley said 90% of Walmart customers want access to affordable organic food products. He said because many of them are not willing to pay a premium all the time, sourcing the products customers want can be challenging.

Since that time Walmart U.S. CEO Greg Foran has vowed to expand the company’s own private label and fill in gaps where needs are not being met. He is also firmly dedicated to fresh produce offerings and has expanded the organic line of fresh produce across the retail chain.

Wal-Mart has also doubled down on price in the past year with its suppliers, demanding absolute lowest cost to remain on shelves and that can been tough to reconcile with organic economics, according to some local experts. Certified organic farming yields are typically lower than with traditional farming methods and production costs are higher.

The demand for non-GMO, certified organic foods grows each year slightly more than the supply which creates pricing power for the organic farmers. One way suppliers are expanding their organic product lines has been through acquisitions of organic farms. For instance Annie’s Homegrown in Berkeley, Calif., was purchased for $820 million in September 2014 by General Mills. 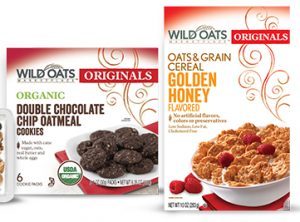 ‘CEDE TO THE NATIONAL BRANDS’?
Experts don’t think Walmart is totally bowing out of the value-based organic packaged food arena given that sales of packaged organic foods in the US increased by 106% between 2005 and 2015 when they exceeded $14 billion.

“If Walmart is indeed terminating the Wild Oats brand within its stores, I would hope that some kind of replacement is waiting in the wings,” said Carol Spieckerman, CEO of Spieckerman Retail. “Great Value is a workhorse of a value private brand but not broad enough to cover off on other important niches including organics.”

That said, Spieckerman has observed that in some stores Walmart is offering broad selections of organic and better-for-you in frozen — Amy’s being one example. She said Walmart is also supporting respected vegan brands such as Beyond Meat and organic versions of non-frozen items from national brands.

“Perhaps organics is one area that Walmart has decided to cede to the national brands. If Wild Oats-branded products disappear overnight, obviously Walmart has done the math and knows that it won’t move the needle in terms of straight volume,” she said.

Spieckerman wonders if Walmart dug deeper to understand how this might impact overall brand perception (the “brand” being Walmart) and loyalty with organic-seeking consumers who appreciated Wild Oats’ value proposition.