Most key economic indicators in Arkansas’ three largest metro areas – central Arkansas, Fort Smith metro, and Northwest Arkansas – were moving in the right direction during the fourth quarter of 2015, according to The Compass Report.

Compared to the fourth quarter of 2015, economic conditions were better in Central Arkansas, were significantly better in Northwest Arkansas, and showed signs of improvement in the Fort Smith metro.

Jeff Collins, the economist for Talk Business & Politics who gathers data used in The Compass Report, said national economic conditions should remain positive in 2016 thanks to rising consumer demand and continued growth in the housing sector. He said barring any unusual state factor, the national economy should help Arkansas’ economy grow in 2016. 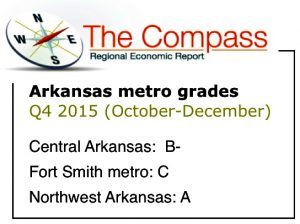 “Despite dire warnings from some quarters of impending recession, the U.S. economy is expected to grow at a steady pace over the next four quarters as low inflation and improving labor markets persist,” Collins noted. “Despite the gridlock in Washington, economic meltdown in China, terrorist attacks in Europe, and ongoing unrest in the Middle East, Americans are doing what they do best, spend. This is evident in the consumption and retail data as well as historically low household debt payments as a percentage of disposable income.”

Collins, a former director of the Center for Business and Economic Research at the University of Arkansas, also believes household budgets will benefit from income growth and low fuel prices.

“As labor markets tighten, income growth should accelerate. Consistent economic growth will increase the pressure on the Fed to raise short-term rates again. In the meantime, most Americans will enjoy lower gas prices, better employment prospects, and rebounding real estate values. As has been the case for some time, the greatest risks appear to come from the international shocks,” Collins wrote.

Sales tax collections in the metro area were up slightly, with $4.292 million reported in December in four regional counties, up from $4.284 million in December 2014.

“We are very pleased to see the Compass grade improve from the previous quarter, and we are hopeful the increased demand for mortgage and commercial loans we’ve seen over the past three months in the Fort Smith region is an indication consumers and business owners believe the economy is improving as well,” Jacimore said.

Collins said the Fort Smith metro will still struggle to maintain a growth trend through the remainder of 2016.

“Despite weak jobs data, the unemployment rate in the Fort Smith area December-on-December was down 0.4 percent. The reason for the decrease was a significant increase in the number of employed (2,309) relative to the increase in the labor force (1,939). .. (T)he metro area economy is likely to struggle through the next four to six quarters despite the forecast for continued growth at the state and national level,” Collins noted.

Sales and use tax collection data indicate that Bentonville, Fayetteville, Springdale, and Rogers have experienced solid growth quarter-on-quarter. In percentage terms, Bentonville experienced the strongest growth in collections (22.9%) while Fayetteville collected the most tax dollars of any of the four major municipalities – $11.2 million in the fourth quarter.

“Of all the economic indicators, unemployment rates at or near the full employment rate of 4.0 percent stand out. Growth has been solid if not spectacular but given the weak performance of construction, manufacturing, and government the overall performance of the regional economy was surprisingly strong,” Collins said.

Job gains and continued gains in sales tax revenue were again economic drivers for the metro area in the fourth quarter. There were 355,100 non-farm jobs in the region in December, ahead of the 351,300 in December 2014.

U.S. ECONOMIC RISKS
Consumer spending coupled with an improving labor market were key growth factors for the U.S. economy in the fourth quarter, and are the leading indicators for future economic activity.

“At the national level, declining oil prices coupled with slowing global growth, particularly in China have many economists revising their forecasts for growth over the next four quarters,” Collins noted in the report. “However the consumer remains king representing two-thirds of U.S. economic activity. For most consumers, declining oil prices and rising incomes have them feeling fairly bullish. According to the University of Michigan Consumer Sentiment index, consumer confidence has been trending up. This coupled with retail sales data provides a strong indicator of consumer behavior in the coming months.”

Other risks to the national and state economies include:
• Consumer confidence has improved significantly but terrorism in Europe could induce consumers to pull back. This is particularly true to the extent that international events impact the equity markets.

• Globally, growth has softened as regional economies in Asia and Europe struggle. This has impacted demand for U.S. goods abroad and stimulated demand in the U.S. for imports as the dollar strengthens against other currencies. Somewhat surprisingly, imports declined in the fourth quarter.

• The political season is unlikely to lead to meaningful action on economic issues as both parties posture. This may be good news given some of the policy ideas being debated in the press.

• While the unemployment rate has improved, it does not adequately tell the entire story. Reduced labor force participation, high unemployment rates for young and minority workers remain persistent problems.

• The Federal Reserve has significantly reduced monetary stimulus in response to stabilized growth. However many economists continue to be concerned about the impact on inflation of prolonged easy money.