“Doug McMillon, CEO of Wal-Mart Stores, told us when he contributed the $1 million to fund it, that he wanted this lab to explore future technologies that help to bridge the physical and digital retail worlds,” said Matt Waller, interim dean of the Sam M. Walton College of Business at the UA.

Waller said land drone technology embraces different disciplines from retail, supply chain, logistics, information technologies, engineering and even retail marketing, all of which have eager students and faculty excited to study and test the drone robot in various applications.

Allan Martinson, chief operating officer for Starship, told Talk Business & Politics the company is testing the prototype in 15 cities in the U.S., United Kingdom, Germany, Belgium and Estonia where the company has a team working in a satellite headquarters. He said the drone has traveled more than 1,500 miles on public sidewalks passing more than 100,000 pedestrians along the way since the company launched Nov. 2, 2015.

He said the drone is controlled by human interaction providing it with the route it will travel in its delivery. It senses people and will stop automatically if needed to allow for interferences in the pathway. The drone travels at a maximum speed of 4 miles per hour it weighs about 20 pounds with the capacity to carry up to 20 pounds of cargo. 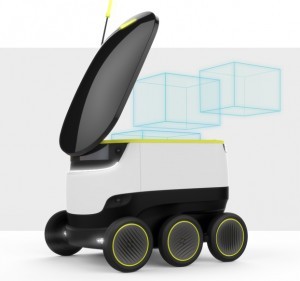 Martinson said it must use sidewalks as its roadway because at the slow speeds and small size it cannot function in the flow of normal car traffic. He said in the cities where the drone has been placed for testing the company has been able to work closely with local governments who in most cases own the sidewalks. He said there has been no major opposition.

“We have been surprised at how well it functions on a crowded sidewalk in Washington D.C. or Manhattan. We found that 80% of the 100,000 or so pedestrians that have passed the drone on the sidewalk have had no reaction. They simply walk right past it. One person walking just raised his duffle bag over the top of the drone as he walked by,” Martinson said. “The other 20% take photos and video, some talk to it, and only on rare occasion a drunk or mentally unstable person has reacted negatively.”

Parcels and groceries are stored in Starship’s hubs and delivered when a client makes a request via the mobile app. It takes about between 5 and 30 minutes for the shipment to arrive and the journey of robot can monitored on the shopper’s smartphone device, much the way Uber operates.

Martinson did not provide the cost of the drone, but said they continue to work on several different prototypes that will vary in price based on durability factors. He said the drone is one way retailers and restaurants can reduce the cost of final mile deliveries by 5-to 10-times the normal rates. He said the customer pays between $1 and $3 for the deliver depending on the distance. Delivery of a bag of groceries or general merchandise up to four miles is $3. He said a four mile trip would take about up to 60 minutes. The more efficient mode would be to deliver within a one-mile radius which may require 15 minutes or less for as little at $1.

Ideally, Martinson said the land drone functions best in urban areas with mostly single stories and usable sidewalks that connect retail stores with neighborhoods. He said the drone is being tested in San Francisco, Washington D.C, and Manhattan but the University of Arkansas is the first test of the product in the Natural State.

“With Walmart here and the University of Arkansas studying this type of technology it was a great fit for Starship. Who knows what other uses they will find for the robotic drone?” he said.

Martinson said Starship Technologies is looking toward the future. This is no surprise given that two of its founders are credited with inventing Skype. Fast forward 25 years, he said self-driving cars will be a reality, but it will make no sense to have your car drive you to the store so you can load and unload the bags. He said it makes more sense to have your bags delivered to you, without getting out the car.

“A 2-ton SUV driving 5 miles releases two pounds of CO2 into the atmosphere. The drone robot would release just 20 grams, making the same trip. The Starship robot runs on batteries and uses less power than the average light bulb,” he said.  “Also drivers spend about 1,000 hours a year making short trips to get things they need. It should make sense to have a robot deliver those items freeing up the consumer’s time to do other things.”

Starship is able to control the drones from a central command center in Estonia or anywhere they set up shop. A remote system control is used for demonstration purposes. Martinson the human operations side of the business is also very efficient as one technician can control up to 100 drones active around the world. Again like the Uber model if Starship has 10 drones working in a city, the operator would dispatch the closest drone available for the job.

The Starship drone does not yet have a name, Martinson said the company is holding a naming contest online and has received thousands of suggestions — some of which are silly. He said rap artist and actor Snoop Dogg took part in the naming contest, telling the company he wants a robot for his own.