An almost 10-year project to restore a Native American mound in Fort Smith continues with The Archaeological Conservancy hoping to soon “rebuild” a missing part of the mound and take other measures to stop erosion.

The “Cavanaugh” Mound, located behind the New Liberty Baptist Church in south Fort Smith, is believed to have been constructed by Native Americans (possibly Caddo Indian ancestors) between AD 1100 and 1300. It is believed the Caddo Indians built the mound in several phases. The mound was originally about 200 feet long at the base of each of the four sides and about 40 feet tall.

“Right now we’re waiting on estimates from two different companies for a cost of hauling in fill to rebuild the missing side of the mound in order to stop the erosion. We’ve removed brush from the top and sides of the mound and are coordinating with the Arkansas Archaeological Survey so they can record and map portions of the mound before it is covered with fill,” Jessica Crawford, southeast regional director for The Archaeological Conservancy, noted in an e-mail to Talk Business & Politics.

Initial estimates were that dirt work would cost $40,000, which was more than the Conservancy expected. The discovery of a human bone in early 2015 and continued erosion caused the Conservancy to expedite plans to stabilize and preserve the structure. Crawford has said the Conservancy would “welcome” a site “with interpretive signs as part of a city park,” but the first priority is to stabilize the mound. 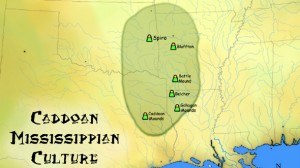 “We’ve managed to do some of the work included in that ($40,000) estimate for less. I’m hoping we can haul in dirt, have it packed down and seeded for less than $20,000,” she said, adding that she hopes the dirt work begins in the next few weeks.

The Archaeological Conservancy, a private, non-profit organization formed in 1980 to acquire and preserve important archaeological sites, purchased the Cavanaugh Mound in 2006.

A February 2016 update by Crawford noted that the mound requires “A Big Job” to preserve. Crawford said this to describe part of the challenge: “(A) large Mississippian/Caddo mound that was damaged many years ago by previous owners who, for reasons unknown, removed about a third of the mound and then later, dug a cellar in its side. The cellar was partially filled in and the ‘tunnel’ entrance is no longer visible. In recent years, the mound has developed a severe erosion problem. The seriousness of this problem was compounded when it became apparent that a historic cemetery on top of the mound (for which the head stones had also been removed by a previous owner) also began to erode. This really is a massive mound and it will require many truck loads of dirt to cover the eroding side. Before much can be done, several large trees must be removed from the top and sides of the mound.”

Tim Mulvihill, an archeologist with the University of Arkansas system and with the Arkansas Archeological Survey, has worked with Crawford and others to secure and preserve the site.

Crawford and Mulvihill have said the mound was not likely used by Native Americans for burial, which would mean ancient artifacts are not buried within the mound. Mulvihill said the structure appears to be a “platform mound” on which a structure might have been built. An attempt to use radar to peer into the mound was attempted in March 2011, but the ground was too dry for usable data.

Crawford said further investigation by digging is not likely once the mound is filled and secured.

“The last thing we want to do is disturb it again, so I don’t expect any investigations after that. There are ongoing investigations right now. The erosion and recovery of the human remains has necessitated careful documentation of the mound by archaeologists with the Arkansas Archaeological Survey, so that is in progress now,” Crawford explained.

In her February 2016 updated, Crawford said the mound work requires great care and she praised those helping with the project.

“Any and all work at Cavanaugh must be done carefully so it doesn’t damage any of the archaeology. We’ll get it done, and we’ve been very lucky to have lots of help and input from Director of the Arkansas Archaeologist Survey, George Sabo, and Arkansas Archaeological Survey Station Archaeologist Tim Mulvihill. Officials with The City of Fort Smith have also been helpful and we have lots of local friends who volunteered for a site clean up in 2010,” Crawford wrote.