On Friday, March 4, over 120 people attended the first annual TEDxUniversityofCentralArkansas on the campus of UCA at the historic Ida Waldran Auditorium.

Among the presenters, participants were surprised with a short concert by UCA alum and American Idol season eight winner Kris Allen. Allen started his performance with the old blues song, “Stand by Me,” following the presentation by Rashod Ollison who spoke about how soul music helped him find his identity. Allen continued with a couple of songs from his forthcoming album and, finally, his award-winning song, “Live Like We’re Dying.” Allen said that people ask him if he ever gets tired of singing the song, however, he said he never tired because he gets to see others singing this song.

In all, 12 presenters took the stage addressing a number of different issues including poverty, social, creativity, community and human being.

John Berrey, Chairman of the Quapaw Tribe, spoke about his people’s history including land in Arkansas and the desire to return to the state and help develop land economically. He stated that the tribe was looking at several pieces of land in which they can leverage some of the resources they have including raising cattle, bison, various agricultural projects as well as various other economic development endeavors.

Dan Ndombe, the Wine Glass Musician, talked about creativity and the best context to nurture creativity. Ndombe told the story of growing up with his family in the Congo in a war zone. At night, his parents would play a game with his siblings and him. The family would lay on the floor to avoid the stray bullets and create music instruments with whatever objects they could find. This birthed in him a love for creativity. Ndombe is an accomplished pianist as well as a creator of musical instruments using various objects. In addition, he is a software developer. Ndombe talked about the difference between being creative versus productive and how most of us feel pressured to be productive in our jobs rather than creative. Ndombe stated that he thought the best place to nurture creativity is in the family. He finished his presentation by proposing a toast to those who are looking for ways to nurture creativity for students and others.

Rashod Ollison spoke about his love of soul music dating back to his childhood. He revealed that it spoke to him more than the emerging rap and hip-hop music of his youth. Ollison talked about the vinyl records his father left behind of legendary soul artists such as Aretha Franklin and Al Green. He felt as if it were an attempt to, somehow, connect to his father. As an adult, Ollison used his love of soul music to become a critic and writer. He is the author of “Soul Serenade: Rhythm, Blues, and Coming of Age Through Vinyl,” which recounts much his life story and how music played a role. 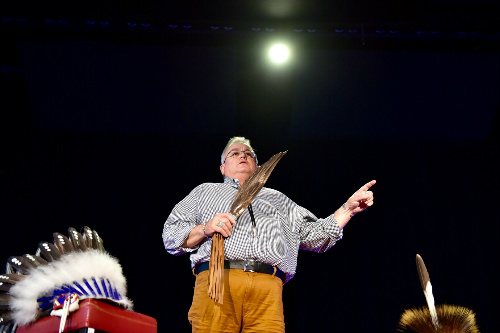