At least two new Northwest Arkansas farmers markets will open this spring and many existing markets are gearing up for their spring openings. Mill Street Market in Springdale and Downtown Rogers Farmers Market will open April 30.

Tiffany Selvey is creator and market manager of the Mill Street Market in Springdale. Her husband, James, is acting as assistant manager as well as operating their family’s produce booth while she focuses on the market information booth. Mill Street Market will be open 8 a.m. to 1 p.m. each Saturday beginning April 30 through Oct. 16.

“We hope that our market will bring more people to the general area and complement the existing Springdale Farmers Market,” Selvey said. “A new downtown farmers market is the answer to a number of problems. Agriculture and craftsmanship is making a comeback, so there are a growing number of farmers and craftspeople in Northwest Arkansas looking for an outlet to sell their products.”

She said the market, located near the Shiloh Museum and near the Razorback Greenway, also creates another venue for the city.

“Being able to meet our friends, neighbors and the entire community at a weekly event will help build community pride and a better understanding between cultures. With so much activity happening in downtown Springdale, a Saturday morning farmers market also seems like the logical next step to encourage folks to come visit,” she said.

Selvey said their group of vendors includes food items all produced or grown in Northwest Arkansas. 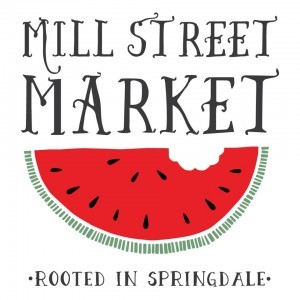 “We have a fantastic group of vendors, and the variety of products found at our 30 plus booths will allow folks to buy most of their weekly groceries from local producers,” she said. “We have grass-fed meat, bread and other baked goods, aged cow cheese made from local milk, and a variety of locally-grown fruits and vegetables. Patrons will also find personal care products like salves, lotions, oils and soaps, baked goods and beautiful craft products.”

The other new market is the Downtown Rogers Farmers Market. The new market, made possible through a partnership with the city of Rogers and Main Street Rogers, will be a covered, open-air market at 101 S. Cherry Street in what was Holland Automotive.

Facility renovation is underway and will include space for a potential stage, room for vendors to move their wares in and out, and food trucks. The work also includes renovating the covered garage areas and the entry ways to allow for food demonstrations and vendor booths, said Ryan Neal, the market manager.

“This is the perfect building for us,” he said. “It’s open air but it helps our vendors and our patrons that it’s covered. The vendors don’t have to bring in their tents to tear down and put up every time.”

The vendor list includes about 15 vendors, mostly with a food focus. The market is scheduled to open April 30 and will be open 7 a.m. to noon every Saturday through the end of October. The market will be open 4 p.m. to 8 p.m. every third Thursday beginning May 19 through Aug. 18.

The market recently was awarded an economic development grant for $100,000, which will go toward building improvements.

Rogers has an existing farmers market but it is a separate entity from the city or Main Street Rogers. The city decided to not rent city property to the Rogers Famers Market after the decision was made for the city to create its own market. Rogers Mayor Greg Hines said city officials had been hearing for several years that residents wanted a bigger, more versatile farmers market. Many had the misconception that the city was in charge of the Rogers Farmers Market because of the name and city-owned location. The city decided to contract with Main Street Rogers to produce their own, Hines said.

Kimberly Scott, Rogers Farmers Market manager, said most of her original vendors moved with her to the new location inside the Frisco Station Mall. The new, indoor location gives them the ability to operate the market all winter. Their summer hours will begin April 30 and they will be open Wednesdays and Saturdays from 7 a.m. to 1 p.m.
Vendor booths will be inside and outside the mall. They will also have the added asset of fresh barbecue being available to patrons, Scott said.

“We’re thankful for what we have,” she said.

Other existing markets are also getting ready to open. The Springdale Farmers Market will continue at the Jones Center for Families but is moving to the parking lot behind the memory walk, said Paula Boles, market manager. The market begins its 19th season May 7 and will run through October. It will be open 7 a.m. to 1 p.m. Thursdays and Saturdays.

Boles said the market has many new vendors as well as returning vendors. The meat vendor will now be available both days each week.

The Bentonville Farmers Market will celebrate its 40th anniversary this year, said market manager Melanie Myers. It began in 1976 and has been managed by Downtown Bentonville Inc. for eight years.

“We are doing a special 40th anniversary on our opening day April 23,” Myers said. “There will be music and children’s crafts. A guest speaker and yoga will be provided by Sunshine School.”

Their main focus will be free community events this year. They will have some form of entertainment every Saturday, she said. The Bentonville Farmers Market will be on the Bentonville Square 7:30 a.m. to 1 p.m. every Saturday from April 23 to Oct. 29.

The Fayetteville Farmers Market, which was first held in 1973, has earned national attention in recent years and organizers have new features for the 2016 summer season. Leann Halsey, business coordinator, said they will host chef cooking demos the first Saturday each month from May to October. They will also collaborate with local chefs and nonprofits to bring “Market Mandala,” which highlights the art of food and the seasonal changes of produce. They will also offer Cooking Local, which offers educational opportunities and sampling of fresh local foods at market.

“In addition to the Monthly Cooking Demos, we will have a bigger and better Salsa Fest in July with tastings and salsa competition from local restaurants. Also, workshops and more on how to preserve local foods,” Halsey said. “In August we will honor the producers and market customers during National Farmer’s Market Week from August 6-13 with lots of great giveaways.”

The Fayetteville Farmers Market also manages a Winter Market at the Jefferson Center.