Tourism is big business in the Natural State, hosting in 2015 more than 28 million visitors who spent a combined $7.2 billion, according to the Arkansas Department of Parks and Tourism annual report released Monday (March 14) at the Governor’s Conference on Tourism held in Springdale.

It was a banner year, according to Kane Webb, the relatively new director of the Arkansas Department of Parks and Tourism, who was one of the presenters at the conference. Last year’s tourism industry generated $374 million in state tax revenue and $137 million in local taxes.

Webb said the 2% tourism development trust fund broke a nine-year record with total collections rising 7.7% to $14.092 million, on the heels of a 7.2% growth rate from the prior year.

When asked to predict 2016 growth expectations, Webb said the year is trending up from 2015. He said if gasoline prices stay around $1.50 per gallon that will likely bode well for Arkansas tourism. He said there’s always going to be challenges in dealing with a lack of awareness about the state and what it has to offer, but the plan launched for this spring is already gaining some traction.

BIKES AND MOTORBIKES
Two large groups the state and its advertising partners are going after in 2016 are motorcyclists and bicyclists with new guide books out this spring. The state tourism team said they visited national motorcycle shows in Chicago and Minneapolis this winter and found that 70% of riders in both places had either ridden in Arkansas or they planned to this year. 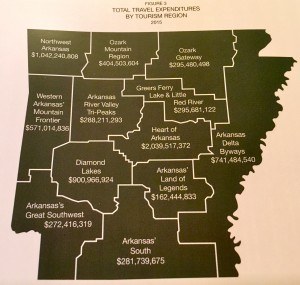 Marla Johnson, CEO of Little Rock-based web developer Aristotle, said 400,000 motorcyclists visited Arkansas last year. She said the Bikes, Blues and BBQ benefit bike rally for nonprofits held in Northwest Arkansas in the fall is third largest bike rally in the country behind Sturgis and Daytona. She said there 11 million motorcyclists in the U.S. who spent $230 million traveling with the bikes last year. Johnson said Arkansas is aggressively marketing to this demographic.

“I know if you live in Fayetteville you might leave town during the Bikes, Blues, BBQ Rally, but remember it brings 400,000 visitors to Arkansas,” Johnson said.

A new motorcycle event in Arkansas during 2015 was the Steel Horse Rally in Fort Smith. The inaugural Steel Horse Rally held in downtown Fort Smith in early May was attended by an estimated 25,000 people and resulted in a regional economic impact of $4.272 million, according to a report from the Fort Smith Convention & Visitors Bureau.

He said the infrastructure being built to facilitate tourism is a key to the sector’s growth. The Walmart AMP in Rogers, Crystal Bridges Museum of American Art and the Scott Family Amazeum are great examples in Northwest Arkansas. He said the Bentonville Film Festival, slated for May 3-8 is also part of that infrastructure. In Fort Smith it’s the planned Marshals Museum and in Northeast Arkansas there’s Beatle’s Park in Walnut Ridge built to commemorate the famous band’s visit there in 1964.

“It’s the one place the four of them landed in Arkansas on Sept. 18, 1964, according to Charles Snapp mayor of Walnut Ridge. A music festival has now grown around this venue and a short documentary-style video from primary sources is now part of the state tourism’s website.

Webb said the Bentonville Film Festival is part of new infrastructure erected in the state, drawing focus on filming in Arkansas. Webb and his team highlighted Larry Foley’s documentary the “The First Boys of Spring” which is a historical look at the training ground major league players enjoyed in Hot Springs beginning in 1886.

This movie sheds light on the historic era of major league teams like the Chicago White Stocking, Boston Red Sox and Brooklyn Dodgers came to play ball in late winter and early spring ahead of the regular season. Hot Springs is now capitalizing on this film and this history, according to Webb.

He said Arkansas has plenty to offer visitors from around the world, and it’s everyone’s responsibility to roll out the red carpet for these guests.

“We have a good game plan, despite being a tough league,” Webb added.

2015 TOURISM DOLLARS
The Parks & Tourism Department released the 2015 preliminary figures on the value of business and tourism travel to different tourism districts in Arkansas. Following is information on the top five regions in terms of total travel expenditures.