It’s been three interesting years in the making for Tracy Blanchard and her South Carolina family as they worked to take their family crab dip recipes from their coastal kitchen to retail giant Wal-Mart Stores.

Blanchard’s fresh crab dips – Big T Coastal Provisions – just got approved in around 1,000 Walmart Stores in the eastern U.S. and dips are slated to be in stores this spring.

Walmart buyer Trevyr Lester recently told Talk Business & Politics that the dip was a hit as soon as the fresh seafood buyers got a taste and heard Blanchard’s story.

“It’s a family business. Her packaging was spot on. The product looked and tasted fresh and the quality trumped everything,” Lester said. “This product fits nicely into our fresh food offerings and we are excited to share that it’s Made in the U.S. and qualifies for this initiative.”

That initiative from 2013 involves Walmart purchasing an additional $250 billion worth of goods that are made in the U.S. over the next 10 years.

Lester said Blanchard had done her homework when she got to Walmart. The dip already has a following and has been featured in Southern Living and Coastal Living magazine as well as being sold in Publix, Piggly Wiggly in the Carolinas and other smaller retailers along the Eastern seaboard. She said the buyer team felt that 1,000 Walmart Stores was a good place for Blanchard to begin, hinting that if all goes well the number of stores would be expanded.

The company has seven flavors and each is made with real crab meat caught off the Carolina coast as well as in the Gulf of Mexico. Blanchard operates with two quality levels that provide retailers with a choice and a higher premium product. She said Walmart opted to start with four flavors. 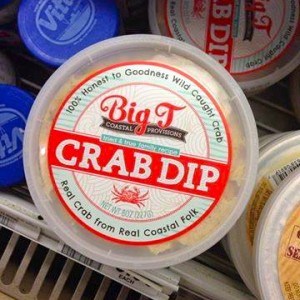 Blanchard said the premium label products consist of 45% fresh crab protein and they command a higher price point of $6.99. The select label dips also contain fresh crab, and they will retail at Walmart for $4.99, which is slightly lower than the price point at other non-discount grocers.

“We know Walmart likes to win on price and we complied,” Blanchard said. “We don’t skimp on the protein ingredients in quality, nor quantity. The dips have to taste fresh, on that we can’t and won’t compromise. We were able to work out terms that we each can comfortably live with.”

HOBBY TO BUSINESS
Blanchard said for years she and her husband Tony tried and tested dip concoctions on their college buddies and other friends and family. Blanchard credits her mother-in-law for the basic recipe which they began replicating and tweaking while in college.

“We would make the dip and give away as gifts, and soon people started encouraging us to market the fresh crab dip to retailers,” she recently told Talk Business & Politics.

Blanchard set out to do just that around 2012 after more than decade of research and pondering the possibilities. To produce the product they found Duke Food Productions, located in Easley, S.C., who understood quality standards and handling of the raw seafood ingredients which are the most expensive part of the dips.

“We use Duke Foods as our co-packer. They appealed to us because they are also a family business and they hold a level 2 safety rating as a seafood processor, which is attractive enough to pass larger retailer approval. Duke has held our hand through this entire process because they already co-pack other products sold at Walmart,” Blanchard said.

STEPPING FORWARD
Three years ago Blanchard said she got the crab dip in to Piggly Wiggly stores across the Carolinas which was 60 locations. They also got into Publix, a large grocery chain in the southeastern U.S., but Blanchard said they have always set their sites on national chains and larger retailers because scaling up production was more cost-effective.

“Walmart has been the shinning star on our horizon for some time now,” Blanchard said.

The company hired a distributor that also got the products in specialty and smaller regional grocers along the East Coast. But the face-to-face at Walmart was a direct result of her meeting a senior seafood buyer at a New York City food show last year.

“I saw the Walmart senior buyer and I literally flagged him down and led him over to our booth where he tried our fresh crab dips. He was very helpful, giving us his contact information and said he would check to see if Walmart was carrying a fresh crab dip in any of its stores,” she said.

Blanchard said contacted him via email after the show and he responded the same day with an invitation for the company to represent to fresh seafood buyers in Bentonville. From there Blanchard said things have been moving a record speed, especially after her dips were a hit with the buyers. The company has 7 flavors and each is made with real crab meat caught off the Carolina Coast as well as in the Gulf of Mexico.

“Everything went really smoothly during our presentation with the buyers. They (marked) us up for the Made in the U.S. initiative and we also are part of the Empowering Women’s initiative given that I run our family-owned business,” Blanchard said.

Tony works as a boat broker after the family’s wholesale seafood business closed in 2011. Blanchard said he and their two children take part in grocery store demonstrations, tastings and other business-related activities as the try and grow their distribution network. She said the company name of Big T Coastal Provisions is from Tony, who is 6 feet 5 inches tall, and nicknamed Big T.

However, Blanchard admits to some trepidation given the pressure to get everything right.

“We so appreciate this opportunity and pray this chance meeting is not lost on us all. I am a bit nervous because of the unknown and the sheer size of it all, but we are excited to plunge in with both feet.”