It’s been more than five years since the recession of 2008 and 2009 officially ended, but consumer spending patterns across Arkansas remain muted compared to the rest of the nation.

Total personal consumption expenditures in Arkansas rose 2.8% last year to $87.3 million. The growth pace rose from 2.6% in 2013, but personal spending across the Natural State is still one of the slower growth paces in the nation, according to Tuesday’s (Dec. 1) report from the U.S. Department of Commerce Bureau of Economic Analysis.

On a per-capita basis Arkansas ranks near the bottom when it comes to per person consumption spending. The report found Arkansas’ per capita personal consumption expenditures for 2014 to be $29,430, only Mississippi was lower at $29,386. This compared to a national per capita spending rate of $37,196. Among the states, Massachusetts had the highest per person spending rate at $48,202. The District of Columbia, not considered a state, set the bar the highest at $55,141.

All U.S. consumers increased their spending by 4.2% from 2013 to 2014, and large states like Texas grew personal consumption spending by 5.7% in the year-over-year period. Other areas enjoying a boom from fracking like North Dakota remained the fastest growing with personal consumption spending rising 7.4%, although it’s at a lower overall level of $35.3 million, according to the report.

Despite somewhat stagnant wages consumers found a way to spend more when it comes to housing, utilities and healthcare, followed by services and nondurable goods. The categories accounted for about half the growth in personal consumption spending by state. But Arkansas consumers still spent less in many categories than consumers in other states. 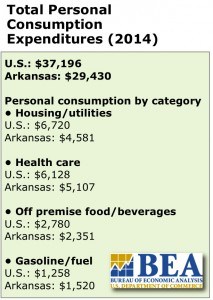 Personal spending on housing and utilities across Arkansas was $4,581 per person, the lowest in the country. This compared to $6,720 across all the states. Housing and utility spending rose 2.9% in Arkansas between 2013 and 2014. This was offset by the sharp decline in gasoline costs.

Together housing and healthcare cost increases attributed nearly half of the overall  annual spending growth by Arkansas residents last year. Arkansas consumers also spent 5% more on their vehicles, 2.7% more eating out and 6.2% more on recreation and accommodation services combined, according to the report.

Transportation spending rose 4% but Arkansas had the largest decline (-8.3%) in gasoline and energy goods spending than any other state last year. The nation as a whole saw a 2.9% dip in energy goods and gasoline spending compared to 2013.

Tyson Foods CEO Donnie Smith recently told the media that consumers are taking their gasoline savings and likely eating out more which is pushing fast casual and quick serve restaurant sales higher than a year ago. He said consumers initially were saving more of that money, but as fuel prices stayed low consumers loosened up the purse strings to enjoy more entertainment which includes eating out.

Arkansas consumers remain somewhat conservative with their spending habits according to a recent report from Arvest Bank and the University of Arkansas. That shows in the BEA report. Durable goods spending rose 1.3% last year in Arkansas, while home furnishing expenditures were 1.9% higher than in 2013. That compares to a nationwide average of 1.7% and 2.8%, respectively.

However, recent tax reports indicate that Arkansans are spending more in 2015.

John Shelnutt, director of economic analysis and tax research for the Arkansas Department of Finance & Administration, said in the October report.