Costs for Medicare and privately insured patients are generally lower in Arkansas than in the rest of the country, the New York Times reported earlier this month.

Medicare has relatively standard rates, while private insurers negotiate prices with hospitals that can lead to wide variations in price. The cheapest price for one type of knee replacement nationwide was $3,400, while that same procedure cost $55,800 elsewhere. In the Little Rock area, prices among five hospitals ranged from $11,300 to $19,800 for that procedure.

The Times reported that mergers of hospital systems, which were encouraged by the Affordable Care Act, can result in lower Medicare costs because large systems can avoid duplicative services. But those mergers also reduce competition, potentially leading to higher costs for the privately insured. 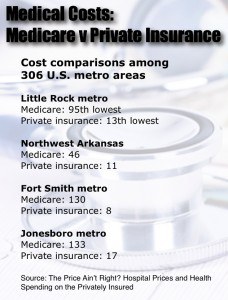 • Medicare spending covers 16% of the U.S. population and is 20% of total health care spending.

• 60% of the U.S. population has private health insurance, which pays for one-third of all U.S. healthcare spending.

• Hospitals account for 31% of healthcare spending and 5.6% of GDP.