Arkansas State University Campus Queretaro (ASUCQ), a private business foundation in Mexico, has acquired 2,125 acres for a comprehensive community development plan near Queretaro, which is a small Mexican state in the north-central part of the country. The 370-acre campus will be the focal point of the project, which will include commercial, residential and recreational components for up to 70,000 residents.

“The campus layout is now visible with substantial earth work completed, steel beams going up for the student union and multiple levels of infrastructure being installed,” Hudson said.

ASUCQ Chairman Ricardo Gonzalez said he expects completion of the first phase of the campus in 2017.

“The expansion of the concept to include an entire master-planned community, the construction challenges of such a complex project in undeveloped land, and our commitment to strict adherence to all permitting and environmental matters made us all realize that the original hope of having the campus ready for students in 2016 was overly optimistic,” Gonzalez said. “In partnership with Arkansas State, we are building a unique, living, learning community and investing in a foundation for better understanding for the future leaders of two of the largest countries in the western hemisphere.”

Edmundo Ortiz, the general director of ASUCQ who is leading the campus development project, said AYESA, a global engineering, consulting and construction conglomerate based in Spain, has set up offices at the site to manage construction. Ayesa’s portfolio of work around the world includes infrastructure projects such as canals and desalination plants. 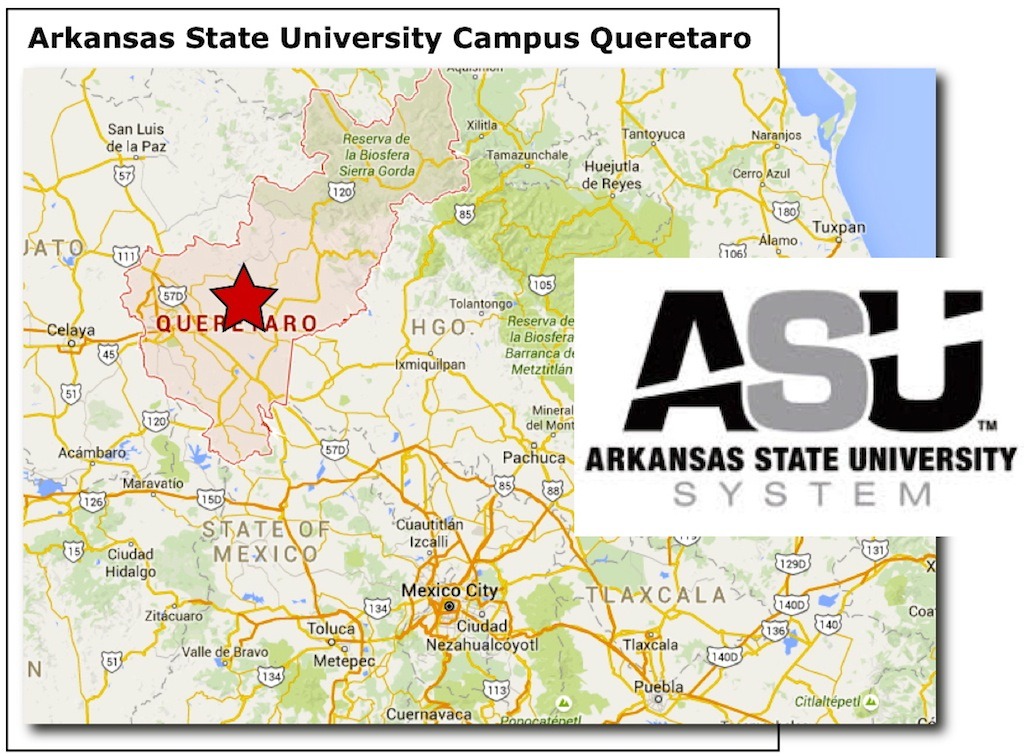 Interest and support from government leaders in Mexico has been important, Hudson and Ortiz said.

“It was important to take time to reach a comfort level for all local community leaders for such a transformative project,” Ortiz said. “The campus will provide well-educated individuals for Queretaro’s burgeoning multinational firms.”

Botello delivered a letter from Gov. Dominguez to Gov. Hutchinson, which read: “I share your view that the establishment in Queretaro would be a transcendent and beneficial endeavor not only for our students, teachers and researchers, but to the integral economic development of our respective states.”

While in Jonesboro, the Mexican leaders toured campus facilities including the Carl R. Reng Student Union, which will be in part duplicated on the Queretaro campus, and met with Provost Lynita Cooksey and other academic leaders.

In Mexico last week, the Arkansas State delegation participated in discussions with government officials, investors and potential technology providers. They joined Gov. Dominguez during a ceremony to inaugurate a new president of the Council of Consulting Industries and Enterprises.

“Queretaro is home to more than 1,000 multinational corporations,” Hudson said. “I was honored that the governor took time during his remarks before such a large and distinguished audience to praise the A-State campus project.”

Arkansas State will become the first comprehensive U.S. university in Mexico with an American-style campus and concepts such as a “living learning” community in a country where almost all students commute and open professional exchanges for faculty, students and staff.

The first phase of academic space for the campus is being designed to accommodate up to 5,000 students, with a goal of 1,000 students in the first year, Hudson said. Arkansas State will utilize funds generated from private gifts for startup costs, and ASUCQ will underwrite all construction and any operating deficits for up to three years after course offerings begin.

The Mexico campus will incorporate the Arkansas State brand and logo and the university’s curriculum. Courses will be taught in English by credentialed faculty approved by Arkansas State, and degrees will be jointly recognized in both Mexico and the United States.

(Link here for a video of the construction progress.)