The Independent Citizens Commission met on Friday at the UALR Law School. Unfortunately, the building is not set up for live-streaming as the House Committee meeting rooms are, but I was able to catch some of their discussion and visit with the commissioners following the meeting. I also have reviewed their internal discussions via a FOIA request.

It is apparent that the commission is now getting down to business and currently is zeroing in on the salary of state legislators. The commission faces a deadline of February 3 for their initial review after which they will be limited to increases or decreases of no more than 15%.  It makes sense then that they are beginning with the officials under their jurisdiction that are paid the least. At $15,869, the 15% limitation would allow no more than a $2,380 increase to $18,249.

At Friday’s meeting, all of the commissioners expressed a desire to see a greater increase for legislators with amounts ranging from $19,050 to $45,000. Each commissioner discussed where they currently would like to see an adjustment today, although no formal proposal was made. The commission invited both House Speaker Jeremy Gillam and Senate President Jonathan Dismang to speak at their next meeting on January 26 with some representation of where their respective members would like to see the salaries.

The two commissioners appointed by former Gov. Mike Beebe both came in on the lowest end of the spectrum. Barbara Graves said she would like to see an increase of around 30% of the current level, which would be around $20,600. Chairman Larry Ross had a handout that recommended $19,050 for legislators and $21,325 for the House Speaker and President Pro Tempore although after the meeting he told me he could see going up to $22,000 for legislators.

Stuart Hill – appointed by Senate President Dismang – said that he would like to see an amount somewhere between the $22,000 range suggested by Ross and the $25,000 range suggested by Tipton.  Brenda James suggested a $26,000 amount, which she felt was close to the median and mean of state legislative salaries in similar states.

The highest suggestion came from Vice Chairman Chuck Banks appointed by Arkansas Supreme Court Chief Justice Jim Hannah. Banks suggested a salary of $45,000 for legislators and $50,000 for the Speaker and President. Banks told me after the meeting that he feels this would be enough to encourage people who would have to give up significant time away from their jobs or businesses to be able to afford to run for office without being an excessive pay level.

The commission also discussed the office reimbursement policy of the state legislatures.  In addition to salaries, Amendment 94 requires the commission to make suggestions of these policies to the House Speaker and Senate Pro Tempore by February 3 as well.

Although there was much discussion, there was little suggestion made for change. The main area they seemed to be considering changing was the practice of paying per diem to non-committee members for attending interim committee meetings. A motion from Tipton approved by the commission asked for a study of the cost saving impact of limiting per diem to only committee members and a half rate per diem for freshman legislators who desire to learn more about the process by attending these meetings.

I break here for a bit of editorializing. I understand the commission’s discussion and certainly share in their comfort in knowing a CPA review takes place annually; however it should also be pointed out that the review simply follows what is called “agreed-upon procedures” to ensure the reimbursements are in compliance with the reimbursement policies and does not examine the policy itself.

However, there are areas in which the policy on office reimbursement could be improved and changes to the policy is what the commission is mandated to suggest. I discussed in detail some of these areas in my post here from back in October. Primarily, I feel the practice of seeking reimbursement for services provided by the legislator’s spouse or children should be re-examined as it appear this could lend itself to some potential dishonesty. Obviously, most legislators have spouses and family members that work hard assisting them, but putting a dollar amount of the time spent on this can be difficult even though the member is technically in compliance with the law.

The current policy states: “To the extent allowed by law, the member may employ a spouse, child or other family member to provide such services and seek reimbursement for the costs of employing such person or persons.”  Perhaps the commission should suggest prohibiting this practice. There also could certainly be tighter policies on the reimbursement for office space used by legislators in their existing businesses or in their homes.

The commission will meet again every day in the last week of January – from January 26 to January 30 – at the University of Arkansas system administration building in Cammack Village and the meetings are open to the public. Commissioners tell me they hope to finalize the proposals for legislative expenses on Monday and then begin discussing the seven state constitutional officers’ salaries. They also emphasize that their proposals will still be subject to a public comment period before they are finalized.

There was also discussion about how state legislators can express their point of view to the commission. This followed testimony from the ever outspoken Rep. Kim Hendren on Wednesday that he did not want the commission to raise the salary for himself or his colleagues. The commission suggested emailing them through the commission’s website and also discussing their views with the House Speaker and the Senate Pro Tempore, who hopefully can speak on their behalf at the next meeting. 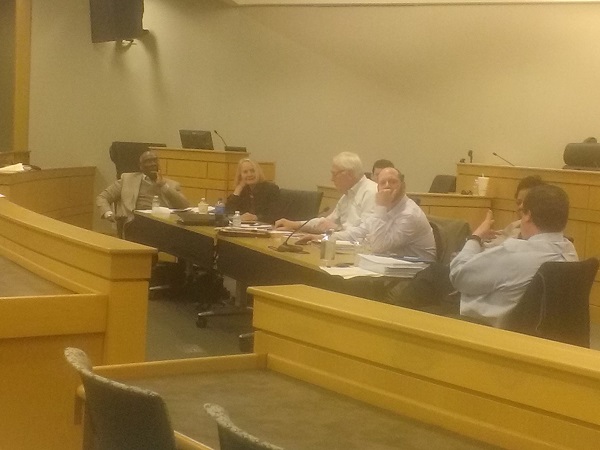