Part of the reason for this involved pictures that went viral on social media of signs posted on state office doors (as the one below) saying “The State Capitol Offices and all State Buildings will be Closed on Monday, January 19, 2015, for the observed birthdays of: Dr. Martin Luther King, Jr. and Robert E. Lee.”

“Arkansas is a great state in so many ways, but it’s time to end this embarrassment. Officially celebrating Robert E Lee on any day is silly, but doing it on MLK day is particularly insensitive (I’m trying to be nice here),” wrote John Hardin who posted a copy of the picture.

The history of the joint holiday dates back to the 1980’s back when Bill Clinton was governor. In 1983, a holiday was established creating a state holiday for Martin Luther King, Jr. however state employees had to choose between taking off on this day or on the existing Robert E. Lee Day. In 1985, Gov. Clinton signed Act 985 into law officially combining the two holidays.

Little consideration has been given to separating the two days or even doing away with the acknowledgement of Robert E. Lee Day over the years.  In 1989, HB 1213 was introduced that would have moved Robert E. Lee Day to the fourth Monday in January while keeping Martin Luther King, Jr. Day on the third Monday, but the bill never got any traction.

But the reaction from most to the joint holiday has not been positive. I remarked on Facebook and Twitter on Monday that it is “past time for Arkansas to get rid of this Robert E. Lee Day nonsense.”  Most people agreed.

“At the very least, we should get rid of the requirement for me to publish the day that way. It is embarrassing to me,” replied Secretary of State Mark Martin whose office is tasked with publishing the flyer seen below.

Also in agreement is a man in a position to do something about it. Rep. Fred Love, D-Little Rock, tells me that he agrees it is time to end the practice and he is willing to introduce legislation that will do so.

“I would definitely support ending the recognition of Robert E. Lee,” said Love. “I would do so because the way I view it is we are a part of the United States of America. The Confederacy is part of the dark past and General Lee is part of that history.”

Whether new Gov. Asa Hutchinson would sign such legislation or not, he tells Talk Business & Politics he is currently undecided.

“I haven’t thought about it, so I’d have to give that some more thought. History is important to me and we’ve got to balance those obviously. Yesterday, I was at a Martin Luther King celebration – the official recognition of that holiday that was very important to me in Benton – so I haven’t looked at that legislation. We’ll have to give that some thought,” Hutchinson said.

Look for this legislation to be filed soon and it should be supported by those in our state legislature. It is time to move on as a state and no longer have signs on Martin Luther King, Jr. Day giving equal billing to Robert E. Lee. This change is long overdue.

UPDATE – A bill – HB1113 – was filed Wednesday by Rep. Nate Bell of Mena that would “eliminate the dual status of the state holiday celebrating Robert E. Lee’s birthday on the same day as the state holiday celebrating the birthday of Dr. Martin Luther King, Jr.”  Bell serves as chairman of the House State Agencies Committee which will likely consider the bill so that is a positive sign.

FYI, I was on KATV’s Daybreak show Wednesday morning to discuss the subject. You can view the video here. 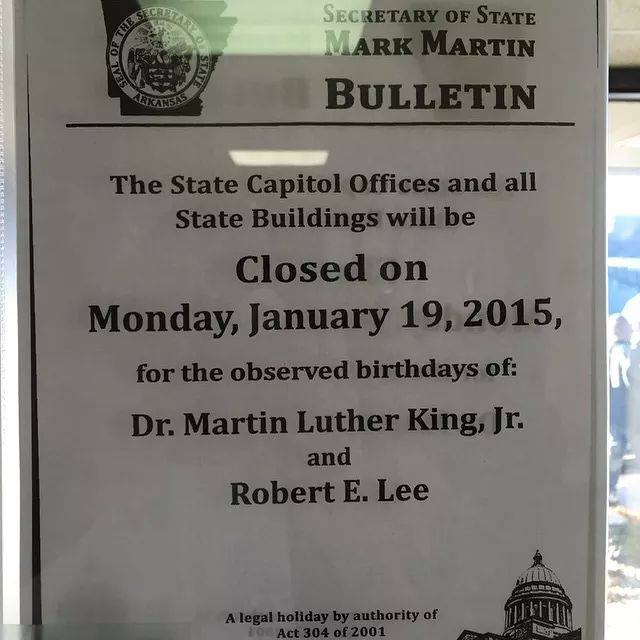