There is lots of coverage today on the inaugural all around the Talk Business & Politics horn. You can read the details here and a full copy of Gov. Asa Hutchinson’s speech here. But I will note a few observations from my right-leaning viewpoint. The theme for the day was “A New Day in Arkansas” and it fits in several ways.

First, there were more Republicans under the dome today than I believe I have ever seen. Of course, this is expected, but it was dramatic to watch. Each constitutional office rolled out the red carpet as the public filled mainly with happy Republicans mingled in and out. Both the faithful faces from across the years, such as former Republican Congressman Ed Bethune, mingled with a host of fresh Republicans too young to remember the years of noble opposition.

War stories were swapped, such as Tim Cain who told me about driving home in 1992 after Republicans got a thorough thumping in Arkansas as the favorite Democratic son Bill Clinton swept into the White House. Cain recalls turning on AM radio and hearing Ted Thomas invite Republicans to a meeting at a local restaurant in Little Rock to organize a comeback. Cain showed up and began his years of working in the trenches to elect Republicans, including running Asa Hutchinson’s Saline County campaign team this past year. Tonight, he tells me he is bringing his daughter to the Inaugural Ball where – of course – they are both volunteering as workers.

The capitol was full of Tim Cains today. But the excitement was not that of a pep rally. It was a markedly different tone than the one felt on election night in November and even different than the Republicans meeting in December following their victories.

Today had a feeling of people who were ready to get to work. Many literally were busy getting ready to start new jobs. Employee badges replaced campaign stickers as new state employees began settling into their office spaces. New legislators were eager for the session to get started and the work to begin.

“It is truly a new day in Arkansas. An historic day,” said Hutchinson in his inaugural address. “A day that many of us never thought we would see in our lifetimes. The Republican majorities are evidence of the realization that a new day requires a new look. A new look at how government works; how we create jobs; how we partner with faith-based and nonprofit organizations, and how we adapt in every walk of life to changing technology.”

The crowd has noticeably shifted from blue to red, but work remains the same – perhaps with a new direction. 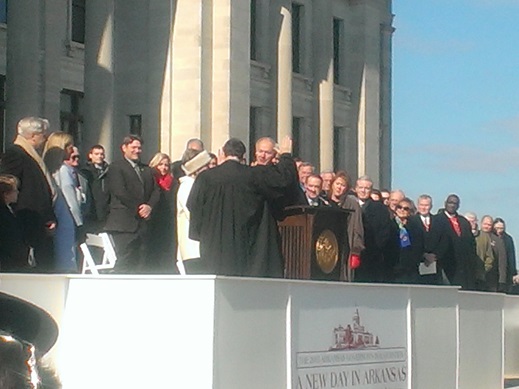