What likely was a record-size crowd of several thousand people marched in downtown Little Rock Sunday as pro-lifers took to the steps of the state capitol for their 37th annual March for Life.

“The 2014 general elections were very good for unborn children in our state and nation,” said Arkansas Right to Life Executive Director Rose Mimms. “In Arkansas, we have a 100% Pro-Life Congressional representation in the U.S. House, U.S. Senate, the state Capitol and have a pro-life majority in the Arkansas General Assembly.”

Both Sen. Boozman and Sen. Cotton as well the three Congressmen briefly addressed the crowd. Rep. French Hill told the gathering that the U.S. House plans to take up a 20-week abortion ban called the “pain capable abortion ban” this week.  This bill is similar to the bill passed by the Arkansas legislature in the last session, but on a national level. A similar bill previously passed in the House, but was stalled in the U.S. Senate.

Gov. Hutchinson delivered the keynote address and brought a return to seeing the sitting governor at the march. While Republican Gov. Mike Huckabee was a fixture at the rally, Democratic Gov. Mike Beebe did not show up during his eight years in office.

Hutchinson – who has attended many of the marches over the years – told the crowd the first one he attended was 28 years ago and there were hardly any elected officials present. Today, he was pleased to see a crowd that appeared to be even larger than what showed up for his inauguration on Tuesday.

“While I am honored to speak here today, I pray for the day when speeches like this are no longer necessary. I pray for the day when the sanctity of life, all life, isn’t up for debate,” said Hutchinson. “Who knows how many lives that unborn child would touch, would change, would improve? And why would we ever want to take the chance of missing out on the talents and intellect of any unique individual?”

Hutchinson said he supports state legislation sponsored by Sen. Missy Irvin and Rep. Julie Mayberry to ban the so-called “webcam abortions” and will sign the bill if it reaches his desk. The proposed law would require a doctor to be physically present when an abortion is performed. It is designed to prevent the procedure where a doctor consults with a patient via a webcam and then delivers a chemical abortion remotely. Although Hutchinson said he does see a benefit to the use of telemedicine in some cases, this is not one of them.

“The point is simple when it comes to the unborn child: if there is any doubt at all, give life the benefit of the doubt,” said Hutchinson who also praised organizations that promote a culture of life by assisting mothers and providing homes for children in adoptive and foster care.

“I was proud to March for Life today at the Arkanasas State Capitol. Life is God-given, and I will fight for the unborn because they too should be protected by the law,” said Rutledge.

The event was another indicator of the historic shift in our state’s political landscape. Arkansas Right to Life Wayne Mays echoed the theme of Hutchinson’s inauguration telling the crowd “it’s a new day in Arkansas.” 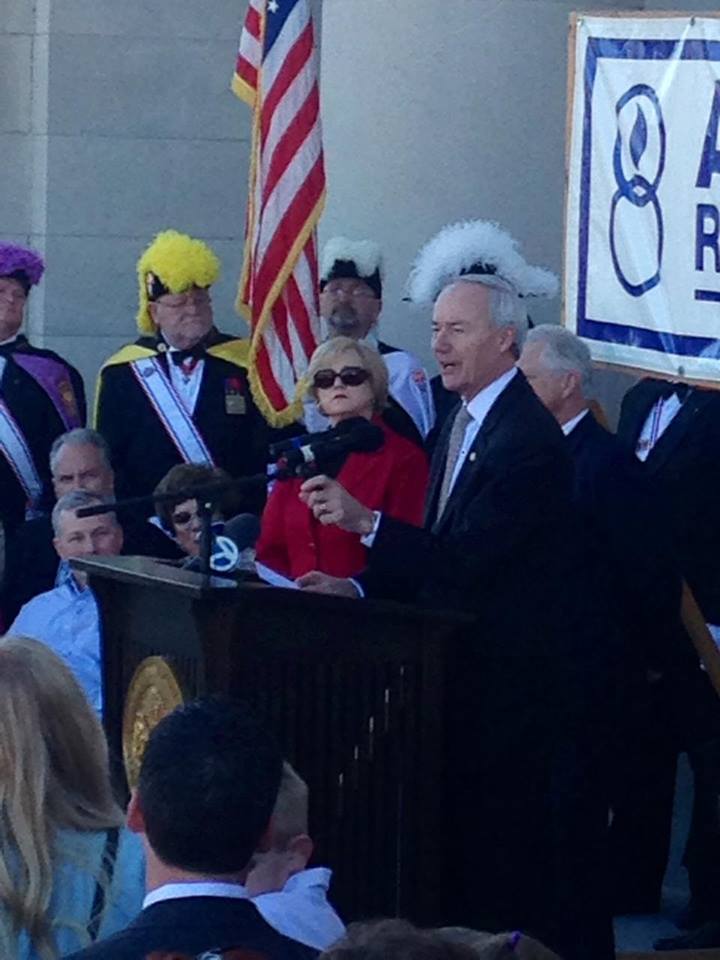