A new report out Thursday paints a less-than-rosy picture for the current state of the Arkansas Scholarship Lottery.  Camelot Global prepared the report specifically for the Arkansas Lottery Commission Legislative Oversight Committee.

Perhaps the most amazing part of the report is that it somehow took five years of operating a lottery for an outside group to come and ask a basic question – can we do this better?  Their answer is, “Yes we can. Way better in fact.”

Much of the report focuses on the need for a five-year plan – currently no such business plan exists – as well as changing the way the lottery is marketed and operated. The in-depth study included conducting a series of consumer workshops, which found a high degree of mistrust for the current Arkansas lottery.  Some of this is attributed to the mismanagement in the early days of the lottery (remember Ernie Passailaigue) as well as the overall way the lottery has been marketed.

The report also concluded that the lottery “under performs versus neighboring and Peer States in terms of per capita sales and profit and player participation” and that “vendor costs are significantly higher than industry and Peer average.”

The cost Arkansas spends on vendors compared to our neighboring state lotteries is quite shocking. The chart below from the report illustrates this well.  In 2012, vendor costs for Arkansas was two-thirds higher on a percentage basis than Oklahoma, which is the next highest state in the peer group studied. Arkansas’ vendor costs were 4.97% compared to 2.97% for Oklahoma.  Costs continue to rise, while sales continue to fall.

At the same time, our lottery has one of the highest payout rates at 67%, while the national average is around 59%. The result is more than 80% of the lottery sales are eaten up in expenses with less than 20% making their way to scholarships. That’s a problem. 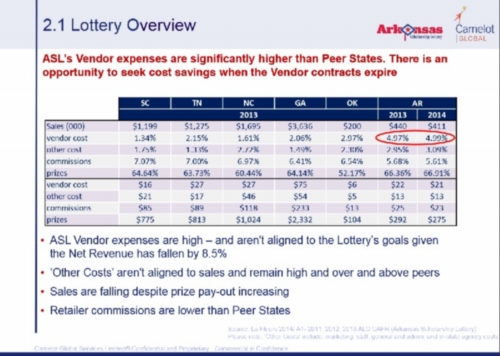 The good news is that the report finds a lot of room for improvement. The question remains now whether the Lottery Commission will be receptive to the recommendations. Signals are mixed.

Lotto director Bishop Woosley has been negotiating vendor contracts. Around 11:45 a.m.  on Thursday, Woosley hastily called a 2:00 p.m. commission meeting for “Consideration of the Online Gaming Contract Extension.”  Then, around 1:50 p.m., the meeting was cancelled without an explanation. (See update II.) The report came out this afternoon as well. Quite a coincidence – don’t ya think?

As for the Camelot report, Woosley is not saying much at this point.

“I won’t have any comment today and probably tomorrow. This is a sizable document with many conclusions and I need to see the data that they relied on in reaching those conclusions. I will wait to hear the testimony of Camelot tomorrow and work with our staff and vendors to formulate an extensive and complete response,” said Woosley.

The report will be presented to the Legislative Oversight Committee on Friday at 10:30 a.m.  That certainly should be interesting.

You can read the report presentation linked here. Below are the key summary points:

UPDATE – I received a response from the Lottery Commission to my earlier FOIA request. You can see the correspondence  linked here between Woosley, Tom Little of Intralot, and various commissioners regarding the contract offer from Intralot. The offer was extended on Wednesday by Little that included primarily continuing with the current rate of 2.45% until July 1, 2015, lowering the rate after that to 2.165% until August 14, 2019, plus kicking in some money for marketing, audit, and charitable contributions.

In other words, a slightly less bad contract than the current bad contract. Woosley forwarded the details to the commissioners Thursday morning at 10:15 a.m. saying it would be voted on Thursday afternoon, but that was the meeting that was cancelled ten minutes before it began. Concerns were expressed by Commissioner Bruce Engstrom as to the details of the figures which – if I may add – is why it is always a good idea to appoint CPAs to these type of commissions.

UPDATE II –  Woosley emailed me on Friday morning with an answer on the meeting cancellation confirming that is was in anticipation of the report.

“After visiting with Senator Hickey and the Chair it was determined that it would be best to wait on the report from Camelot before considering the extension proposal,” said Woosley.