It would have required one helluva crystal ball in early 2014 to bet that two struggling Arkansas-based trucking companies would see their stock price more than double by year end. Ditto for a bet that the equity markets would add more value in 2014 to two retailers with share prices already flying high at the end of 2013.

But that’s what happened in 2014, and such moves were part of a year that saw share price gains for 13 of 17 publicly held companies based in Arkansas. (The markets officially close out 2014 with a shortened trading day on Wednesday.)

Tontitown-based P.A.M. Transportation (NASDAQ: PTSI) began the year with a share price of $20.75 and a lackluster history in 2013. The share price closed Tuesday (Dec. 30) at $49.51, thanks to an improving national freight environment that boosted the company’s business. Through the first nine months of 2014 P.A.M. had net income of $11.358 million, up 145% from the $4.619 million earned in the same period last year.

The better freight environment also boosted the fortunes of Van Buren-based USA Truck. The trucking company began the year fending off a hostile takeover attempt by Knight Transportation. The share price for USA Truck (NASDAQ: USAK) began the year at $12.59. But financial performance improved during 2014, with the company on track to end five consecutive years of losses. The result is a Dec. 30 closing price of $28.19.

RETAIL GAINS
Little Rock-based Dillard’s (NYSE: DDS) begin the year with a share price of $96.85, and despite somewhat flat 2014 financials compared to a hot 2013, the equity markets boosted the share price to $124.21 on Tuesday.

Bentonville-based Wal-Mart Stores (NYSE: WMT) was able to make small improvements in 2014 to its same-store U.S. sales. However, the markets must have liked what new CEO Doug McMillon was doing and saying about the global retailer’s future. The share price, which began the year at a respectable $78.91, clawed higher through the year to close Dec. 30 at $86.79 – near a 52-week high of $88.09.

Although slight, the world’s largest retailer was able to reverse its comp store sales trend with U.S. stores during the fiscal third quarter. It was the first net positive increase since 2012. Same store sales in the U.S. – including Sam’s Club – were up 0.5% compared to a decline of 0.1% during the same quarter of 2013. Same stores sales among Neighborhood Markets – the company’s leading small-store format – were up 5.5%. The company also reported that e-commerce sales worldwide were up 21%.

The story was similar at ArcBest, the parent company of ABF Freight System, one of the nation’s largest less-than-truckload carriers. For the first nine months of the year, ArcBest recorded net income of $31.633 million, considerably better than the $5.465 million in the same period of 2013. Total revenue for the first nine months of 2014 is $1.947 billion, up 11.6% compared to the 2013 nine-month period.

It continued to be a year of acquisition and integration for Conway-based Home Bancshares, (NASDAQ: HOMB) the parent company of Centennial Bank. For the first three fiscal quarters of 2014, the bank holding company reported $83.137 million in net income, well ahead of the $53.57 million during the same period in 2013.

However, the markets are hesitant to reward the aggressive acquisition pace and net income growth. The bank began the year with a $36.36 share price, and closed Tuesday at $32.09, down 11.7%.

Little Rock-based Acxiom Corp. (NASDAQ: ACXM) struggled to reinvent itself during 2014. The company reported three straight quarterly losses during the year. Third quarter revenue slid from $267.77 million one year ago to $260.04 in the most recent quarter. The data and digital marketer posted a $1.54 million loss – a departure from a $9.84 million profit in the previous year.

Acxiom has altered its company model, in part, to adapt to new marketing strategies for clients who have shifted away from traditional direct mail consumer contact to utilizing digital products and outreach. 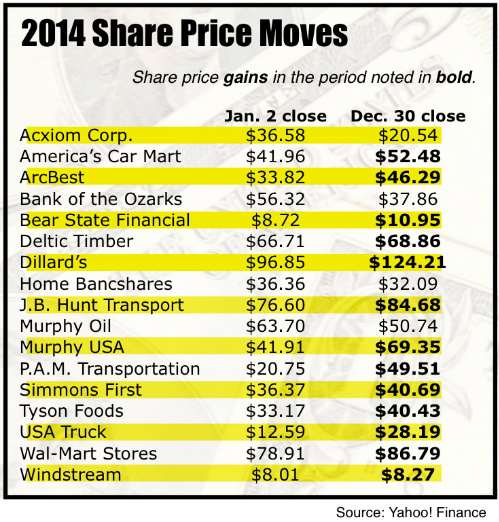