A hot and sweaty pre-storm press conference underneath a big white tent on the greens at The Village at Hendrix was the backdrop for Conway’s latest expansion of its new urbanism experiment.

On Tuesday (July 23), city leaders and representatives from Hendrix College, Delta Trust & Bank and The Purple Cow restaurant announced Market Square South, a three-story 30,000 sq. ft. privately-funded commercial project that will be anchored on the ground floor by the bank and popular eatery.

Conway Management, Inc., a hotel management firm, will also office in the space and the second and third floors will be available for student housing at Hendrix College.

“We’re very excited about this unique partnership,” said David Knight, chairman of the Hendrix board of trustees. “Market Square South will be a great addition to both The Village and to residence life for our students.”

Unlike a traditional commercial lease arrangement, the building’s ownership will be shared. Hendrix will own the upper two floors of the building and the investor group, which includes the ground floor tenants, will own the first floor. The project is expected to be completed by year’s end and will be open for business in early 2014.

“We want to expand our market share in metro Little Rock and the fastest growing, most successful part of metro Little Rock is Conway,” said Delta Trust & Bank CEO French Hill, who also chairs the Greater Little Rock Chamber of Commerce.  He said the new facility would be state-of-the-art to cater to the area’s high-tech residents and customers.

The Village at Hendrix is a mixed-use residential and commercial project that was launched in 2006. The number of homes has exploded in the village and the shop offerings have also expanded. Today’s announcement adds even more momentum to the successful effort, says Conway Mayor Tab Townsell.

“We believe that the whole concept of new urbanism is important.  We have great areas inside Conway that can be redeveloped to make a more intensive use, but also create a greater quality of place.. . You go back a 100 years, that’s what we had,” Townsell said.

“There are a lot of young families in the city of Conway and it fits our demographic,” Tappan said. “There are young families in an emerging economy and they’re looking for hospitality. We think in a college town we’ve got a fun environment to put it in.”

Tappan said there is no doubt that he hopes to pull from the college’s student body for potential part-time workers. With its proximity to campus, students can walk from a dorm to the development in less than two minutes.

“College kids are a viable part of our workforce. They understand hospitality, they can relate to families very well. We can adapt to flexible hours. The food service business teaches valuable aspects from customer service to managing finance to delivery and execution,” Tappan added.

The Purple Cow, which mirrors a 1950’s style diner with hamburgers and milkshakes, currently has locations in Little Rock, Hot Springs, and three locations in the greater Dallas area. Tappan said North Little Rock, northwest Arkansas and markets outside of the state are “on his radar” for additional expansion opportunities. 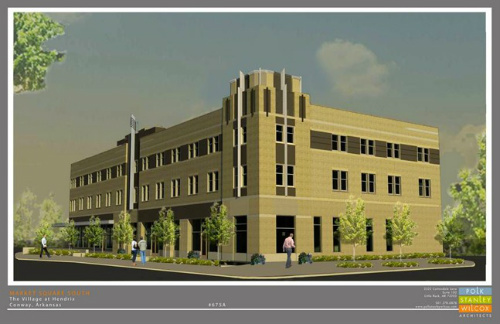