In a tough retail environment, a Little Rock-based boutique marketplace chain has grown from one store in 2015 to 18 locations now, with plans to increase that number to about 35 by the end of 2022 and 200 within five years.

Painted Tree opened its 18th store, this one in the Chicago suburb of Bloomingdale, Illinois, on Nov. 20. Soon to open is a store in Overland Park, a suburb of Kansas City. It will be followed by stores in Cary and Matthews, North Carolina, by the end of January. Stores in the Salt Lake City, Phoenix and Denver areas will open in the first quarter of 2022.

Painted Tree has 25 employees in its home office and 350 total. But the owners expect those numbers to grow significantly. Home office employees are encroaching on booth space. Eventually, the entire current West Little Rock store could serve as corporate headquarters, with another store opening elsewhere.

The company rents space at rates ranging from a couple of hundred dollars to $1,000 – far less than a retailer would pay to operate a standalone store. Painted Tree also takes a 10% cut of all sales.

Painted Tree handles all the purchases at the front of the store so the vendors don’t have to be there. Some vendors come every other day. Others come less often. Employees walk the aisle and straighten the merchandise when vendors are not there. The arrangement relieves vendors of the headaches of running a small business, like collecting sales tax.

“They don’t have to worry about payroll,” said Cavallo. “They don’t have to worry about accounting. All they have to do is bring the products that they love, set it up, make their space their own, and then let us do the rest. They’re able to do what they love without actually having to quit their day job, and they can do this as kind of a side hustle, and then some end up doing it full time and have grown to 15, 16, 17 stores with us.” 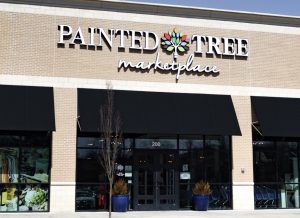 The company offers vendors an inexpensive way to run their business along with a sense of camaraderie. Cavallo said the shared location creates synergy and energy and leads vendors to up their games to match their neighbors. The company offers fun vendor events and special incentives for “VIP” vendors who are in three or more stores. Some vendors have only one location. Others are in many stores, travel often and have their own employees.

For shoppers, Painted Tree offers a hands-on experience that doesn’t directly compete with Amazon. Buyers can browse shops and touch and feel the merchandise. They can smell the scented candle, buy it, and take it home.

“We are a shopping experience, so we want people to come in,” Gillum said. “We don’t group the clothing here and the home decor here and the gifts here because we want the shoppers to go through the aisles. It’s sort of a treasure hunt idea.”

Gillum and Cavallo aren’t experts in shopping trends and don’t have to be. They rent space. Unlike dedicated retail operators, they don’t have to guess what will sell months in advance, order perhaps millions of dollars’ worth of merchandise, and then hope buyers’ tastes don’t change. 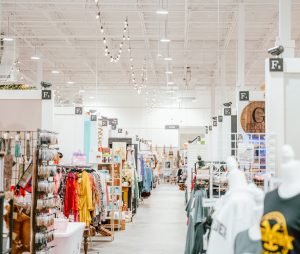 “It’s their job, these vendors, to come up with the right products that will sell, that’s in demand, that isn’t something they can just go online and buy it for cheaper,” Gillum said.

The presence of local vendors is another factor in Painted Tree’s success, Gillum and Cavallo said. Lindsey McGinty comes from the family that owns the B.R. McGinty heating and air company. She knows many people and has been a vendor for years.

“Her people often come to shop her space, right? Because they know her,” Gillum said. “And while they’re here, they might also buy some other things from other people. Well, that’s going on times 200 in here.”

The 50-50 partners say they are a good fit with each other. They both enjoy working with people and have an entrepreneurial spirit. Gillum, 52, is more aggressive; Cavallo, 38, is more cautious.

The two followed different paths to their partnership. Gillum owned an upscale West Little Rock photography studio, Gillum Photography, which he closed when he saw that digital cameras were lowering the barriers to entry, and when he grew weary of working 40-50 weddings a year. He then opened Business Brokerage of Arkansas. Cavallo had been a youth minister working with Gillum’s children, whom he called “top 10 of my favorite kids ever.” When he left the ministry, he joined Gillum’s brokerage firm.

It proved to be a challenge. Business brokerage was a feast or famine business, and Cavallo, then in his early 30s, at times struggled to gain the respect of older owners wanting to sell their businesses for more than they were worth.

After brokering a flea market, they decided to start a home decor marketplace alongside Interstate 30 in Bryant as a side business. From the beginning, they wanted the vendors to be more upscale than is typical for such ventures. They planned to be selective, expecting it would take a while to fill the booths. Instead, their selectivity was an attraction for vendors.

Painted Tree’s name was Cavallo’s idea. He wanted a visual name, like “Apple,” and an online search turned up a tree in a forest that had been painted blue. He considered different names. “Painted Tree” had a nice ring to it.

The name brought back memories of a previous low point in his life. His newborn son was in the ICU, he was losing his job, and, hoping to save money, he was trying to replace his own sewage lines after watching how to do it on YouTube. At one point, he was knee-deep in raw sewage in a 12-foot hole, realizing the pipe he had laid didn’t match the city’s lines. At that discouraging moment, a huge oak nearby seemed to offer reassurance that the storms of life could be weathered.

Following the success of the Bryant store, Gillum and Cavallo opened another in Sherwood, two in the Dallas-Fort Worth area, and one in Memphis, closing the brokerage in the meantime. They consolidated the Little Rock operations by closing the Bryant and Sherwood stores and moving to the current store on Chenal Parkway in West Little Rock. As they grew, they focused on suburban rather than urban areas. Rent is more affordable, and it lets them reach upper-middle class moms whose homes are large enough to house the decor the stores sell.

At first, Painted Tree marketed itself somewhat as a vintage marketplace. Cavallo said HGTV’s Chip and Joanna Gaines were mixing old and new in their home decor, so that was popular. But styles have changed since then, and the company moved away from the vintage concept. Antiques would have kept Gillum and Cavallo away from the upscale “power centers” where they wanted to be. In fact, they often wouldn’t have been allowed to rent there.

Like other retailers, the company struggled during the lockdowns at the beginning of the COVID-19 pandemic. During a group phone call, Gillum and Cavallo informed the managers they were being laid off, not knowing if they would be able to come back. The two toured their 7-8 stores to ensure the lights had been turned off and the doors locked. In the process, they both believe they contracted COVID, although it was so early in the pandemic that they couldn’t be tested. The business survived with help from the government’s Paycheck Protection Program loans, which allowed them to pay their full-time employees.

As the economy reopened, Painted Tree was in a better position than many other retailers. People were home a lot, which made them more interested in buying the vendors’ merchandise. The stores’ open environments offered a relatively COVID-safe place to get out of the house and spend a few hours. Other retailers were closing, which meant landlords were looking to fill space. People who previously had full-time jobs were looking for another way to earn an income, which increased the number of available vendors.

Gillum and Cavallo initially intended to stay in the southeast part of the county, but they soon saw the concept could work anywhere. They opened stores in the St. Louis and Chicago areas and have continued growing. They’re not ruling out any state as they move toward their goal of 200 stores.

“If the deal makes sense, then especially in the 48 states, we’re ready to go,” Gillum said.