Hypersonic flights, which generally exceed Mach 5, are capable of speeds of at least 3,600 mph and considered as important as the launch of stealth technology more than a decade ago, according to the release. Hypersonic vehicles experience temperatures between 392 and 1,472 degrees Fahrenheit or more. The challenge to allow for such next-generation engines is to create electronic systems to operate reliably under high vibration and at these high temperatures for at least 50,000 hours.

The three-year DARPA project will use Ozark IC’s eXtreme Nodes (XNodes), which are single-board, rugged computer modules designed for high temperatures and vibrations in extreme environments, to develop an instrumentation system for high-speed propulsion systems. The instrumentation system will use multiple XNode products that work together to cover the 392- to 1,472-degree temperature range. The AQ200 Aggregator XNode will receive data from several AQ350 XNodes, and they will receive data from several RN800 XNodes.

The project will require a secure and robust supply chain, according to the release, and will draw on the expertise of the following partners: 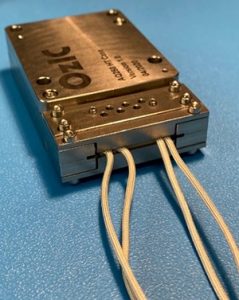 “This contract is a major step in our company’s history in the scope and duration of the contract, the range of partners with whom we will be working — not to mention the ability to extend the high-temperature range of our XNodes,” said Matt Francis, founder, president and CEO of Ozark IC. “Our team can’t wait to move forward on this project to show how our family of XNode products will work together from 200 (degrees Celsius) all the way to 800 (degrees Celsius).”

Federal legislators provided the following statements on the project:

“Ozark IC’s technology is critical to providing our military and aerospace industries with next-generation tools,” said U.S. Rep. Steve Womack, R-Rogers. “This DARPA contract is a testament to their impressive work. By supporting the cutting-edge research happening right here in Arkansas, the partnership will accelerate the development of innovative and hypersonic systems of the future.”

U.S. Sen. John Boozman, R-Ark., said “Arkansas is incredibly proud that a homegrown company is playing such an important role in support of our nation’s defense and the development of improved military capabilities. I’m pleased DARPA recognizes the value in partnering with an innovative firm like Ozark IC in order to advance ground-breaking research and achieve solutions that will serve our national security interests.”

U.S. Sen. Tom Cotton, R-Ark., said “By ceding semiconductor manufacturing and development to countries like China, the United States has given those countries dangerous leverage over our nation’s future. Ozark Integrated Circuits is helping to ensure we maintain a robust microelectronics ecosystem in the United States. I’m proud of their work to contribute to our nation’s safety and security.”