The overall vacancy rate for commercial real estate in Northwest Arkansas declined 1 percentage point to 10% in the second half of 2019, from the first half of 2019, as experts await the effects on the market from the COVID-19 (coronavirus) pandemic, according to a new real estate report.

Fayetteville-chartered Arvest Bank released Tuesday (March 31) the semiannual Skyline Report on commercial real estate in Northwest Arkansas for the second half of 2019. The bank previously released Skyline Reports on residential and multifamily real estate for the second half of the year. Arvest Bank sponsors the reports that are completed by the Center for Business and Economic Research (CBER) in the Sam M. Walton College of Business at the University of Arkansas.

The overall vacancy rate for commercial real estate fell to the second-lowest level in five years and was up slightly from the 9.7% rate in the second half of 2017. Meanwhile, the value of commercial building permits that were issued in Northwest Arkansas rose to a 15-year high in 2019.

“The Northwest Arkansas market has added more than 1.5 million square feet of new office space since the beginning of 2015, and during this time the vacancy rate for such space has steadily fallen,” said CBER Director Mervin Jebaraj. “This demonstrates the continued demand for quality, rentable office space in the region. It will be very interesting to see how the current financial situation due to COVID-19 impacts growth and demand in the region in the near-term.” 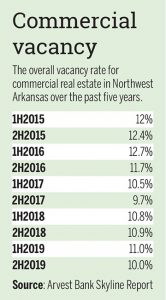 The office sector added 180,382 square feet of new space, while 248,891 square feet were absorbed, resulting in positive net absorption of 68,509 in the second half of 2019. The more than 1.56 million square feet of office space that have been added to the market over the past five years comprise 54% of the total office space noted in the first Skyline Report in the second quarter of 2004. The market has continued to absorb the additional space as the office vacancy rate has fallen over the past five years.

“The commercial real estate market in the region continues to see strong growth and even stronger demand,” said Mark Ryan, executive vice president and loan manager for Arvest Bank of Benton County. “Almost as quickly as developers can complete new projects, they are becoming occupied. At Arvest, we will be closely monitoring how the current economic situation will impact the market and working with our customers to ensure that they are making the necessary adjustments to their future plans.”