Alcohol at Razorback Stadium, ranking the region’s top CEOs and the prospect of a Governor Sarah Huckabee Sanders. If you want opinions from residents of Benton and Washington counties, just ask them.

Quality of life remains the most important issue driving growth in the region. By a more than three-to-one margin, neighborhoods/lifestyle and quality of life top schools, distance from jobs, access to Interstate 49 and public trails or recreation.

“Northwest Arkansas has sold itself effectively as a quality area to work, live and play. That’s reflected in these results,” said Dr. Jay Barth, political science professor at Hendrix College, who helped conduct the poll.

One of the notable changes is the use of the region’s trails. A year ago, 52% said they never use the regional trail system for biking, running or walking. That’s fallen to 42% as some of those residents now use it once a month or rarely, an indication that investments in this outdoor amenity is slowly gaining more interest.

A year ago, Benton County and Washington County residents were supportive of extending the sales tax on a state road program by a 47-38% margin. That was a linchpin of a state highway plan that was referred from the most recent legislative session. However, don’t look for that sales tax support to translate to the national level. In the latest poll, 50% said they would oppose raising federal fuel taxes to support road improvements, while 37% said they would be supportive. 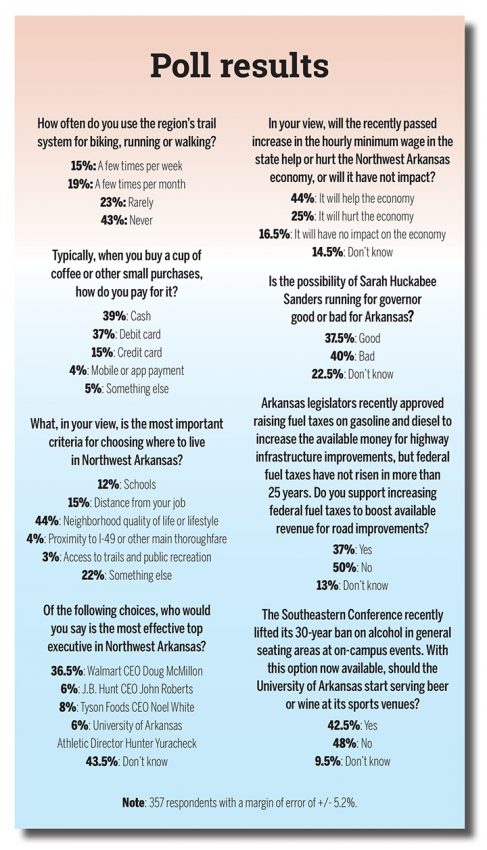 POLITICAL & BUSINESS POPULARITY
It wouldn’t be a poll without asking about some high-profile personalities. Earlier in June, White House Press Secretary Sarah Huckabee Sanders announced she would leave the post and return to Arkansas. President Donald Trump suggested she run for Arkansas governor in 2022, a move she’s said to be considering.

Northwest Arkansas residents are closely divided on whether her running for governor is a good or bad idea. Roughly, 37.5% said her run would be good for the state, 40% said it would be bad, and 22.5% said they were undecided. The real story is in the demographic splits.

“Few Arkansas political stories have captured as much attention in recent years as the return to the state of Sarah Huckabee Sanders with a possible — indeed, probable — 2022 campaign for a return to the Governor’s Mansion where she came of age,” Barth said. “The results suggest that the Sanders coronation might be a bit premature.

“The strength in Sanders’ numbers comes predictably from Republican voters, 59.5% of which view the prospects of her running for governor as good for the state, while 19.5% of Republicans take the opposite view,” said Robert Coon, managing partner of Impact Management Group, which provides political consulting to GOP candidates.

“The key factor in her ability to wage a winning campaign may be in the 21.6% of Republicans who don’t know — giving Sanders the opportunity to define herself and grow support among her base or to be defined negatively by her opponents,” Coon added. “As might be expected, Sanders’ potential candidacy is viewed poorly by Democrats (82.4%), though that opposition will have little impact in a Republican primary where the main battle will be fought.”

If there would be a battle for popularity among the four biggest employers in the region, Walmart CEO Doug McMillon would win the contest. McMillon is by far considered the most effective top executive in Northwest Arkansas with 36.5% of residents touting his abilities. Tyson Foods CEO Noel White (8%), J.B. Hunt CEO John Roberts (6%), and University of Arkansas Athletic Director Hunter Yurachek (6%) were also scored. Undecided at 43.5% actually led the field.

ALCOHOL & THE MINIMUM WAGE
Two issues related to business and sports were also tested in the poll. With football season approaching, a new alcohol policy for Razorback events was tested. The Southeastern Conference (SEC) announced a few weeks ago a revision to its existing limitations on the availability of alcoholic beverages at athletics events. Under the revised policy, each SEC school now has the autonomy to determine the permissibility of selling alcoholic beverages in its athletics venues, subject to certain conference-wide alcohol management expectations.

When asked if beer and wine sales should be allowed at sports venues on the University of Arkansas campus, results were once again slightly divided, although age, gender and political views showed great variance.

About 42.5% said they supported alcohol sales at Razorback games, while 48% opposed. Just 9.5% did not have an opinion.

“A clear pattern is shown across age groups from youngest to oldest,” Barth said. “Just at 80% of 18- to 29-year-olds favor the sale of alcohol, while barely 20% of those aged 65 or above do. A clear split is also shown on partisan lines with a majority of Democrats favoring the sale of beer and wine, while a majority of Republican and Independent voters oppose it, showing the cultural divide between the parties. Finally, a significant gender gap is shown on the matter with a healthy majority of women opposing it and a majority of male respondents supporting it.”

The overwhelming support for the initiative last fall was built on a coalition of Democrats, Independents and Republicans. Coon said Independents and GOP voters’ views in the poll show why the issue remains popular.

“This strong Democratic enthusiasm combined with support from Independents and a segment of Republicans is a testament to why this initiative passed with 68% of the vote statewide. Notably, female voters are more positive about the effect that the minimum wage increase will have on the economy than men by 6 percentage points,” Coon added.

Northwest Arkansas Business Journal editor Paul Gatling offered his takeaways on a couple of polling items in this interview on Talk Business & Politics.