EDITOR’S NOTE: The following story appeared in the Nov. 26 issue of the Northwest Arkansas Business Journal. “Then & Now” is a profile of a past member of the Business Journal’s  Forty Under 40 class.

Amber Savage describes her recent work as dabbling in projects. Yet to some people, her projects would be dreams of a lifetime.

Savage, a member of the Northwest Arkansas Business Journal’s Forty Under 40 class in 2006, moved to Franklin, Tenn., two years ago when her husband was transferred by Mars Petcare.

She has made connections that led to her styling a music star for an international music awards show, designing a cover for an award-winning fiction book, selling her own fine art, and counseling small-business owners in marketing and social media — all the while raising two sons, ages 4 and 7.

Savage relishes living a stone’s throw from Nashville and within driving distance of the beach and many large cities. She is well suited to the friendly nature of the Volunteer State. As an extrovert, she finds herself introducing longtime neighbors to each other.

“We think of Arkansas as southern. Well, Nashville and Franklin pour it on thick,” she said. “The newness of everything here is exciting. There is a huge scene for art, music and food. It’s so fun to meet all the interesting people, and I have several new friends who are artists, writers and musicians.”

One of Savage’s new friends is Jay O’Shea, of the country music duo O’Shea. When the singer was invited to host and perform at the Country Music Association Awards in Tamworth, Australia, earlier this year, Savage offered to help her find dresses.

They flew to New York City, where O’Shea tried on gowns for five hours in the atelier of couture designer Randi Rahm. Ultimately, O’Shea selected six custom-made, hand-beaded dresses valued at $100,000. Savage ensured that the dresses arrived timely for a photo shoot in Nashville, made it to the awards show in Australia and were safely returned to New York.

Another of her recent projects was designing the cover of a novel, “Finding Franklin,” for author Katie Shands. The romantic mystery is set in the city of Franklin and has since become a Janice Keck Literary Award winner. For the cover, Savage’s rendition of the city’s skyline was created with a blend of watercolors and graphic design.

She’s not a trained artist but follows her instinct and uses a combination of styles on large canvases. She likes acrylic paint and impressionistic and loose abstract techniques.

“I like to focus on nature, lots of florals and ocean scenes. I used to be very realistic and tedious, but I’ve loosened up the past few years and am embracing imperfections.”

Savage sells her large-scale art for homes and businesses through word of mouth and connections that she makes with interior designers. 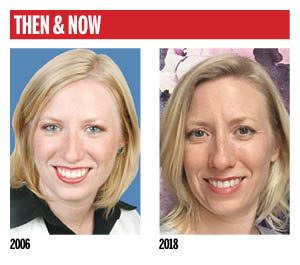 “Creating paintings that make people pause, slow down and take a deep breath, and helping small-business owners with planning and implementation are icing on the cake for me,” she said.

Savage returns to Northwest Arkansas several times a year to visit her parents. She comes from a family with a creative spirit. Her maternal grandfather restored and refinished antique pump organs. Savage learned to sew as a child and sold her first commissioned art while attending Rogers High School, where she graduated in 1998. She remains a fan of former high school art teacher Darcy Brooks.

Savage then departed for New York City, where she earned a fashion degree at the Fashion Institute of Technology and worked in the press department of designer Helmut Lang. After graduation she assisted designer Randi Rahm in creating signature dresses.

In 2002, Savage returned home and earned a business degree from John Brown University. At the time of her Forty Under 40 recognition, she was working for New Creature and had helped grow the company’s promotional department to more than $1 million in sales. She worked heavily in marketing and did fashion styling for Walmart.

When Savage married Greg Reifschneider and they began their family, she decided to largely be a stay-at-home mom, and that’s still her priority. The person she was in 2006 would not have expected that path, she said.

“I was definitely passionate about working, and I would be completely surprised by my life now,” she said. “But now I have the best of both worlds. So I’d say, never say never. Stay open to possibilities. And take care of yourself. It is so important to slow down and make the time to enjoy all the beautiful joys that life brings.”