ONF, a natural foods retailer, announced earlier this summer its intention to sell its 24,820-square-foot building on the end of the Evelyn Hills Shopping Center and relocate further south toward downtown to a 32,893-square-foot building at 380 N. College Ave. The building housed several grocery tenants through the years, most recently CV’s Family Foods. The business closed this past spring.

Contracts have been in place on both buildings and both deals were expected to close in September. But recently, commercial real estate firm Sage Partners placed a sign in front of the Evelyn Hills location at 1554 N. College Avenue, advertising 50,000 square feet of grocery/warehouse space. Colliers International is the property manager for Evelyn Hills, with the exception of the ONF building.

Sterling Hamilton, a commercial real estate broker with Sage Partners who is marketing the ONF building, said there have been “some complications” with the deal to sell the property. He declined to elaborate on the nature of the problems.

He said placing the marketing sign on the property even though the building is still under contract is a precautionary measure.

“We [Sage Partners] plan to market the Ozarks Natural Foods building if the current contract is unfeasible,” he said. “The owner of Evelyn Hills is from Dallas and is planning some renovations and we believe the center will be a great destination for whomever buys Ozarks Natural Foods space.”

Hamilton said the ONF board of directors is expected to vote Wednesday (Sept. 5) on whether to move forward with the purchase of the vacant grocery store, even if the contract to sell its existing building falls through.

Hamilton is also the listing agent for that property on behalf of the current owner, the Hubert Charles Agee family of Springdale. 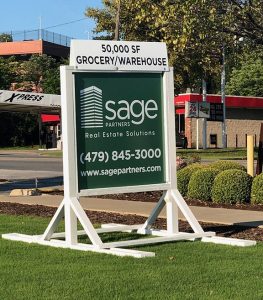 ONF General Manager Mike Anzalone also declined to discuss specific problems with the contract to purchase the co-op’s building. He did, though, offer a statement to the Northwest Arkansas Business Journal.

“Ozark Natural Foods currently has more than 10,000 owner/members. We have been discussing this move for several weeks, and have found that the very vast majority of them are supportive of the move and excited about the potential. We all believe that this move will be good for our coop, good for our community and great for our downtown.”

ONF has been at its current location since November 2000 when it relocated from Dickson Street in Fayetteville. It occupies a portion of a building that previously housed department store Montgomery Ward.

ONF bought the building from the investor group that owned Evelyn Hills in 2008 for $2.2 million.