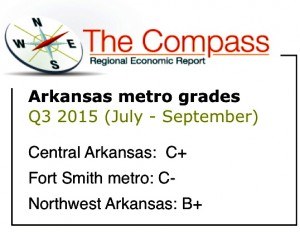 The U.S. economy should continue to do well, which helps Arkansas’ three large metro areas. Continued improvements in the national jobless rate could also help with wage growth.

“Improvement in the national unemployment rate has finally reached a point which corresponds to upward pressure on wages. The unemployment rate stood at 5.3% at the end of the third quarter. Of the 387 MSAs in the country, only 2 posted rates above 10% in September and 2 had rates below 3%. No Arkansas MSA had a rate above 8%,” said Jeff Collins, the economist for Talk Business & Politics who gathers the extensive data used in The Compass Report. He also is a former director of the Center for Business and Economic Research at the University of Arkansas.

Collins also said oil prices are expected to remain low, and business investment should continue to help the economy into 2016.

“Business investment had been one of the bright spots for the national economy. Although recent data indicate investment spending slowed recently, the outlook is for spending to accelerate through 2016,” Collins said.

Residential construction as measured by number of permits was down but as measured by value up significantly quarter-on-quarter (-35% and 22% respectively).

Collins said the inability of the Fort Smith metro economy to post consecutive positive quarters is not a surprise.

“Data for the Fort Smith regional economy had been mixed for some time. The obvious conclusion is that the region has been significantly impacted by structural changes in the U.S. economy. Specifically, despite rebounding output in the manufacturing sector employment has not returned to previous levels,” he said.

“We are pleased to see the Compass Report grade has not declined from the second to third quarter of 2015,” Jacimore noted in a statement. “With current mortgage rates again nearing all-time lows and seeing home construction continuing in new subdivisions in the Fort Smith area coupled with the progressing construction of the proposed Arkansas College of Osteopathic Medicine and the new ArcBest headquarters, we are optimistic about the future of Fort Smith and proud to be a part of it.”

Nonfarm employment grew rapidly June-on-June. The metro economy added roughly 5,600 jobs, up 2.5%. Also, improved construction activity has translated into improved employment in the sector. Since the height of the recession when sector employment fell to a little more than 7,000 jobs, the sector has grown by approximately 20%.

Improved construction activity has translated into improved employment in the sector. Since the height of the recession when sector employment fell to just over 7,000 jobs, the sector has grown by approximately 21%. September-on-September the sector was unchanged despite strong permit activity and trend growth. Based on permit data the sector employment is likely to grow in the coming quarters.

Interestingly, despite the relatively larger size of the Central metro area, there were 118 more building permits issued in the Northwest Arkansas metro (1,082 vs. 1,220). The discrepancy was even more pronounced looking at permit valuation. The value of permits in the Central Arkansas metro was roughly $98.4 million for the quarter versus $242.8 million for Northwest Arkansas.

Sales and use tax collection data indicate that Bentonville, Fayetteville, Springdale, and Rogers have experienced solid growth quarter-on-quarter. In percentage terms, Bentonville experienced the strongest growth in collections (24%) while Fayetteville collected the most tax dollars of any of the four major municipalities ($10.5 million in the third quarter).

“Strong growth is expected to be the norm in Northwest Arkansas for the foreseeable future,” Collins said.

Overall job gains, especially in the construction and tourism sectors, and stability in sales tax revenue helped the region to continue gains from the first quarter. There were 352,800 non-farm jobs in the region in June, ahead of the 346,700 in June 2014.

Looking at the construction sector, building permit data revealed solid activity for the quarter. Expectations are the sector should add employment in the coming months but at a slower rate for the next several quarters. There were an estimated 18,600 construction jobs in the region during June, well ahead of the 16,100 in June 2014. The tourism sector posted 34,500 jobs in June, better than the 33,300 in June 2014.

Comparing the most recent three month period to the same period for the previous year, sales and use tax data indicates that retail activity grew for the metro area by approximately 3.3%.

“Weak growth in the government sector aside, the Central Arkansas metro has performed reasonably well coming out of the recession,” Collins said in the report. “The declining unemployment rate and growth in non-farm employment are positive signs the region has returned to trend. Given the size and over-all importance of the metro to state economy, a return to trend growth is very positive news.”

U.S. ECONOMIC RISKS
All eyes continue to be on the consumer, according to Collins.

“The U.S. economy is being driven by the consumer. Consumer confidence has improved significantly but an international crisis could induce consumers to pull back. This is particularly true to the extent that international events impact the equity markets,” Collins noted.

Other risks to the national and state economies include:

• Globally, growth has softened as regional economies in Asia and Europe struggle. This has impacted demand for U.S. goods abroad and stimulated demand in the U.S. for imports as the dollar strengthens against other currencies.

• There are significant structural challenges to the Chinese economy which must be addressed to create stability and a sound basis for a return to growth. Unfortunately short-term imperatives make those changes extremely difficult.

• While the unemployment rate has improved, it does not adequately tell the entire story. Reduced labor force participation, high unemployment rates for young and minority workers remain persistent problems. Income growth is perhaps a truer signal that labor markets are finally returning to normal.

• The Federal Reserve has significantly reduced monetary stimulus in response to stabilized growth. However many economists continue to be concerned about the impact on inflation of prolonged easy money.