Arkansas Children’s Hospital officials confirmed the hospital’s intent to construct a new, 225,000 square-foot campus in Springdale during an announcement at the annual Color of Hope Gala Friday evening (Aug. 7). The initial estimated investment is $184 million during the next five years, with the facility set to open in 2018.

The Springdale campus is part of the hospital’s plan to “blanket the state with services that will improve access to pediatric care and improve the health of children throughout our state,” said Little Rock-based ACH President and CEO Marcy Doderer.

The plans start with a land donation, announced during the gala. The campus will be constructed on 37 acres donated by David and Cathy (George) Evans, Gary and Robin George, and their families. The land is near Interstate 49 between Don Tyson Parkway and Highway 412, bordered by South 56th Street and Watkins Avenue across the street from Arvest Ballpark.

Another, different kind of campus is planned for a plot of land near the new hospital. The location is near where NorthWest Arkansas Community College plans to operate a Washington County center at 56th and Watkins.

“We would be pleased to have our friends at Arkansas Children’s Hospital as neighbors,” Steven Hinds, executive director of Public Relations and Marketing for NWACC, toldThe City Wire Friday evening after the hospital news was announced.

THE NEED
Robin and Gary George spoke during the gala and spoke of the “quick and easy access to healthcare” for children that the new hospital will provide.

“Arkansas is called the Natural State and children are our greatest natural resource,” Robin George said.

Gov. Asa Hutchinson was also on hand for the announcement. He agreed that children are the state’s greatest natural resource and said the hospital is “one of our state’s gems.”

Part of the hospital’s efforts to create a statewide system of care includes the arrival of two new Angel One helicopters, which officials said should be in full use this month. They replace two older Angel One units. The new Springdale campus is the first major footprint advancement in the statewide plans. ACH will detail additional plans for expanded services across Arkansas throughout the coming months.

The need in Northwest Arkansas for the intense, high-quality child healthcare that ACH provides is increasingly evident. Last year, an estimated 21,000 children were treated at the ACH Clinic in Lowell and more than 450 children were transported to Arkansas Children’s Hospital via Angel One helicopters and ambulances.

As the population in Northwest Arkansas continues to push beyond 500,000 residents, the estimated number of children needing pediatric care also is expected to increase. Officials estimate that the pediatric population in the region is growing two- to three-times faster than in any other part of the state. Further, at least 27% of the children in the region live in poverty and half grow up in low-income households.

ACH officials said that with the proposed site location, 70% of Northwest Arkansas residents will be able to reach ACH’s services within 30 minutes or less.

According to a press release from ACH, Cathy and David Evans’s daughter, Erin, was treated at ACH for a life-threatening heart condition and their grandson, Benton, was treated for a urology complication.

Also, Robin and Gary George’s son, Charles, went into heart failure at only two weeks old in 1982. He was flown to ACH, where he received a cutting-edge procedure to repair his heart. In 2004, their two-year-old grandson Hayden Swope received life-saving care at ACH after contracting an E. coli infection.

“Once you’ve needed ACH, you realize the impact it has on the children of Arkansas,” Gary George said in the release. “My sister and I know firsthand how wonderful the physicians and staff are at ACH. Having access to that kind of world-class care right here in Springdale will be a game changer for so many families.”

SPRINGDALE CAMPUS DETAILS
The proposed 225,000-square-foot facility will include:

“The ultimate scope and success of the project will depend greatly on generous individuals, corporations and foundations supporting the construction effort,” said Dr. Robert Steele, Senior Vice President and Chief Strategy Officer at Arkansas Children’s Hospital. 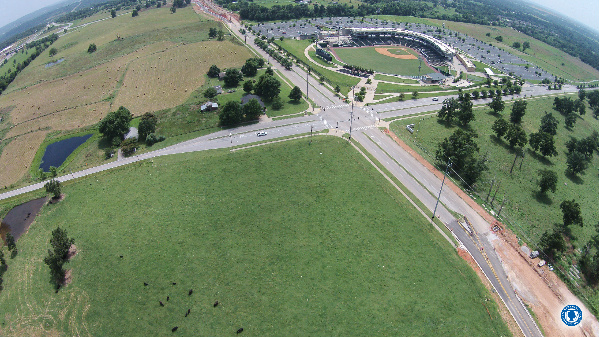