Editor’s note: The Arkansas Tourism Ticker is sponsored by the Arkansas Hospitality Association with research and content managed by The City Wire. It is published every two months.

Arkansas’ 2% tourism tax continues to set records for monthly collections, and 16 of the 17 cities reviewed for the Arkansas Tourism Ticker posted hospitality tax revenue gains through the first four months of 2015. The period continues the positive trends that began in 2014. 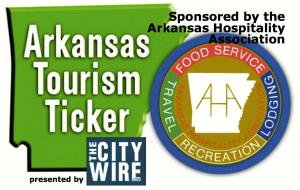 The Arkansas Tourism Ticker shows that the three key measurements of Arkansas’ leisure and hospitality sector between January and April posted healthy gains over the same period in 2014. The ticker is sponsored by the Arkansas Hospitality Association and managed by The City Wire, and uses the following three measurements to review the health of the state’s tourism industry. The Arkansas Tourism Ticker will be produced every two months, or six times a year.

Results for the January-April ticker report are:

+6.06%
Gain in combined January-April hospitality tax collections in 17 Arkansas cities compared to the same period in 2014

HOSPITALITY TAXES
The combined hospitality tax collections in the 17 cities totaled $13.523 million in January-April, up 6.06% compared to January-April 2014.

Gains during the four-month period ranged from 28.3% in Springdale to 1.53% in North Little Rock. During the January-April period, only El Dorado saw a hospitality tax collection decline.

STATEWIDE TOURISM TAX
Collections of Arkansas’ 2% tourism tax in January and April totaled $4.247 million, up 7.25% compared to the $3.96 million in January-April of 2014. Collections for each of the four months of 2015 set a new record for that month.

TOURISM JOB NUMBERS
The monthly jobs average in the travel and tourism sector during January and April was 113,600, up 6.51% compared to an average of 106,650 during the first four months of 2014.

Previous post
Message to entrepreneuers: ‘You don’t need permission to affect change’
Next post
P.A.M. Transport Profits Surge 97% In First Half Of 2015